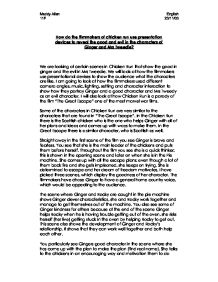 How do the filmmakers of chicken run use presentation devices to reveal the good and evil in the characters of Ginger and Mrs Tweedie?

How do the filmmakers of chicken run use presentation devices to reveal the good and evil in the characters of Ginger and Mrs Tweedie? We are looking at certain scenes in Chicken Run that show the good in ginger and the evil in Mrs Tweedie. We will look at how the filmmakers use presentational devises to show the audience what the characters are like. I am going to look at how the filmmakers used different camera angles, music, lighting, setting and character interaction to show how they portray Ginger and a good character and Mrs Tweedy as an evil character. I will also look at how Chicken Run is a parody of the film "The Great Escape" one of the most marvel war films. Some of the characters in Chicken Run are very similar to the characters that are found in "The Great Escape". In the Chicken Run there is the Scottish chicken who is the one who helps Ginger with all of her plans and ideas and comes up with ways to make them. In the Great Escape there is a similar character, who is Scottish as well. Straight away in the first scene of the film you see Ginger is brave and fearless. You see that she is the main leader of the chickens and puts them before herself. ...read more.

In this scene you also see more wickedness from Mrs Tweedy as she attacks Ginger with the axe. This is also the first time you see Mrs Tweedy from a high angle camera shoot, this makes her seem less powerful and more vulnerable. In this seen Rocky saves Ginger buy knocking down Mrs Tweedy. You see a close up of Ginger smiling when she sees Rocky, which shows the audience her feelings about Rocky. As the Crate goes over the fence there is triumphant music, which makes the audience think that the chickens have succeeded. Right from the start of the film, from her first entrance you see Mrs Tweedie as an evil character. She is shown, as a tall dominating character and the camera angle is nearly always a low camera angle, which gives the impression to the audience that she is a dominating, bossy which fits in with the evilness of her character. Also her voice is quite and has a very harsh northern accent, which means it is quit threatening and manly. The audience also get the impression she is not a nice character by the way she treats her Husband and there relationship, all the way through the film they refer to each other as Mr and Mrs Tweedie, never by there first names. ...read more.

This shows the audience more evilness in Mrs Tweedy's character because it gives the impression that she would do this to the chickens and shows here clue nature by teasing them. When Mr Tweedy has finished fixing the pie machine you see Mrs Tweedy enter. The doors open and Mrs Tweedy is standing there, as she opens the doors there is a load thundering nose with lightning in the sky. This is a great setting for this scene because it sets the scene to be frightening and sinister. When she is talking to Mr Tweedy here face is highlighted with red light, she then refers to the chickens and says "all of them" (she wants to put them all in the pie machine); the red represents blood and again shows the evilness of Mrs Tweedy. Then there is a close up of part of the moving machine, which is also highlighted with red light. This again represents blood and death, because the machine will be what causes the deaths of the chickens. I have found it interesting to learn that a film is not just about the characters and there actions but that it can be just as much to with the camera shots and angles filmmakers chose, the lighting, music and presentational devises used. It has shown me what filmmakers use to get messages across to the audience and how important the less obvious things are. Maddy Allen English 11F 23/11/03 ...read more.