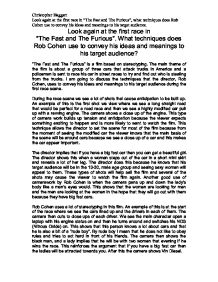 Look again at the first race in

Look again at the first race in "The Fast and The Furious". What techniques does Rob Cohen use to convey his ideas and meanings to his target audience? "The Fast and The Furious" is a film based on stereotyping. The main theme of the film is about a group of three cars that attack trucks in America and a policeman is sent to race his car in street races to try and find out who is stealing from the trucks. I am going to discuss the techniques that the director, Rob Cohen, uses to convey his ideas and meanings to his target audience during the first race scene. During the race scene we see a lot of shots that cause anticipation to be built up. An example of this is the first shot we view where we see a long straight road that would be perfect for a road race and then we see a highly modified car pull up with a revving engine. The camera shows a close up of the engine. ...read more.

on. This shows that this person knows a lot about cars and that he is also a bit of a "rude boy". By rude boy I mean that he does not like to obey rules and tries to act hard in front of his friends. The camera then shows the black man, and a lady implies that he will be with two women that evening if he wins the race. This reinforces the argument that if you have a big fast car then the ladies will be attracted towards you. After this the camera shows Vin Diesel. He does not need the women to entice him or the computers to help him. He is the stereotypical "hard man" because he does not need help from anybody or anything. Following Vin Diesel the camera shows the last driver who is Japanese. He is playing on a Playstation 2 instead of looking at girls or turning on NOS. This is another stereotype as Japanese people are usually related to high tech objects. Rob Cohen uses film language to show that the film is based around illegal activities. ...read more.

In real life when cars are being raced the passenger floor does not just fall through onto the road by itself. Rob Cohen uses this to emphasise the fact that the racer is daring and that he does not fear death or pain. Again this is attractive towards the viewer because the viewer wants to see action and death defying deeds. This point also applies towards the second point concerning the on board computer showing a warning. To conclude I believe that Rob Cohen has put his meanings across using film language admirably. He has used subjects and objects that will appeal to the target audience including cars, women and crime. These three themes are the main basis of the film and Rob Cohen has exploited these three themes so that his film will appeal to a larger target audience. At the end of the day the film has to sell and this film would have done very well at the box office because of the relationship that is built between the viewer and what is going on on-screen. Christopher Haggart Look again at the first race in "The Fast and The Furious", what techniques does Rob Cohen use to convey his ideas and meanings to his target audience. ...read more.