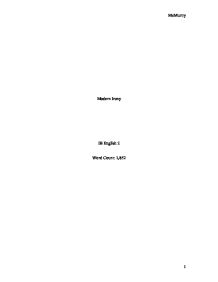 Modern Irony IB English 2 Word Count: 1,852 Outline Modern Irony Introduction: Tom Stoppard's critique of modern society utilizing his plays Rosencrantz and Guildenstein Are Dead and Arcadia; which addressed this issue, and particularly, the method in which he dealt with the issue of "fate" and the everyday quarrels of life (i.e. s*x, knowledge, etc.). Also, he explores the idea of controlling one's own destiny. The random manner that his characters offer mirrors society in a way that defines him as a great playwright. His utilization of plays to effectively mirror society serves to show people the humor and irony that life presents. I. Introduction to thesis statement a. Tom Stoppard's utilization of satire and drawn parallels mirror the image of societies' faults and intricacies. b. Plays and period in which they were written; and relevance to thesis. i. What were people experiencing and feeling during this time period? II. Stoppard's Writing Style a. Playwrights and authors which had a large impact on Stoppard's style of writing i. Samuel Beckett, T.S. Elliot ii. Theatre of the Absurd III. Rosencrantz and Guildenstein are Dead a. Its elements of humor drawn from the stauncher Hamlet b. How it appeals to real people's desire to comprehend their meaning and existence in general c. ...read more.

He achieves this by his satirical depiction of the internal "play" within "Hamlet" by Shakespeare. The characters in the "play" perish, and then the actual characters die in the exact same manner. The audience can identify with death, as all humans are concerned with their own demise. They take away though, a much less serious approach in viewing it. The other author, Elliot, often depicted his characters as stumbling and indecisive. One of his most famous works, The Love Song of J. Alfred Prufrock, deals with a man who is enamored with the variables and uncertainties of approaching a woman that he admires. In the poem, Prufrock realizes that only he cares about his decision, and whether he chooses to pursue her or not, will not matter. He sees himself as part of his own world; in which he is the "sole occupant." He, sadly, is only coherent enough in his "world" though to realize how much he is potentially missing by not being completely immersed in it. He cannot solve this problem though, and continues wandering and pondering till the end of time. Stoppard took away from Elliot a similar stance to character development. He portrays his characters as aware, but not completely in tune with their surroundings. ...read more.

These mysteries will eventually be solved, but it shall take time and patience; nothing is instantaneous in life. Stoppard's inclusion of Thomasina's "equation" is both humorous and practical in its implication. Thomasina's goal was to create an equation that could more or less tell the future. It is humorous to surmise that a simple equation can predict the future with numbers. The limitless variables and uncertainties in life will forever impede such an "advancement." Stoppard attempts to explain that life itself is intangible; it can neither be predicted nor reduced to a simple equation. Stoppards' plays contain many useful outlooks on how a person should view their life on earth. People are always concerned with the future and their own death (and when it will occur). Stoppard believes that man shouldn't view life with such a critical eye; and instead should accept certain facts to be true. Man is powerless concerning the ability to control life. There are many uncertainties in life that are both humorous and infinitely escapable to the human mind. His plays show inept characters driven into the ground by their consumption of the "study of life." Stoppard suggests through his characters' comical adventures that life is for living, and the consequence of a life spent longing and pondering equates to a life disenfranchised of pulp and meaning. The "meaning" which man longs for cannot be quantified; it must be experienced to break the surface of significance. ...read more.