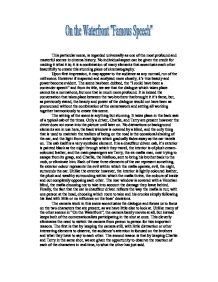 This particular scene, is regarded universally as one of the most profound and masterful scenes in cinema history. No individual aspect can be given the credit for making it what it is; it is a combination of many elements that accentuate each other beautifully to create this stunning piece of cinematography. Upon first impression, it may appear to the audience as any normal, run of the mill scene. However if inspected and analyzed more closely, it's true beauty and power become evident. The scene has been dubbed, the "I could have been a contender speech" and from its title, we see that the dialogue which takes place cannot be a normal one, but one that is much more profound. It is indeed the conversation that takes place between the two brothers that brought it it's fame, but, as previously stated, the beauty and power of the dialogue would not have been as pronounced without the combination of the camerawork and setting all working together harmoniously to create this scene. The setting of the scene is anything but stunning. It takes place in the back seat of a typical cab of the times. ...read more.

This cleverly eliminates the need to switch the camera from person to person for two important reasons. The first is that by keeping the camera still, with little distraction or other interesting elements to observe, the audience's attention is focused on the brothers and what they have to say to each other. The second reason is that by keeping Charlie and Terry in the same shot, we are given the opportunity to observe the reaction of each of the characters in real-time, to what the other has just said. Such an intense scene with such wonderful camera work, naturally demands top quality acting, and this is delivered superbly. The scene features two actors at the peak of their careers. In a quote from the film's director, we are reminded that: "If Marlon Brando has ever performed better than he did in this scene, then I certainly have yet to see it". As the scene moves on, it leaves behind some of the serenity with which it commenced and the screenplay grows more intense and fast-moving. As both characters are in the same shot, we see their reactions to each other's last words, and this serves to add yet another dimension and degree of realism and credibility to the scene. ...read more.

The car pulls over and Terry is let out. Charlie has made his decision. This final part of the scene, the pulling over of the car is again very symbolic. Terry steps out from the black car representing the mafia and into the street. He has left the mafia now, and as the car drives away, Terry moves into the dim light of the street lights, symbolic of the hope that he is now presented with. In retrospect, I feel that everything concerning this scene, its every aspect is a work of genius. Never before, and possibly never again, will a cinema audience be given the chance to experience such emotion in such a short space of time. The intensity as Charlie is calculating his decision is overwhelming, and the screenplay is nothing short of a masterpiece. We are cleverly made to focus solely on the brothers, whose superb acting upholds the script beautifully, leaving nothing to be desired. I feel that this scene easily merits the stunning reputation it has acquired as one of the most famous scenes in cinema history, and I'm sure it will retain its title for years to come. ...read more.