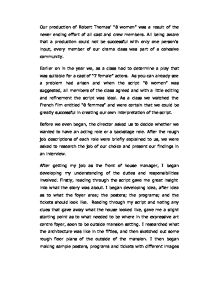 Our production of Robert Thomas'

Our production of Robert Thomas' "8 women" was a result of the never ending effort of all cast and crew members. All being aware that a production could not be successful with only one person's input, every member of our drama class was part of a cohesive community. Earlier on in the year we, as a class had to determine a play that was suitable for a cast of "7 female" actors. As you can already see a problem had arisen and when the script "8 women" was suggested, all members of the class agreed and with a little editing and refinement the script was ideal. As a class we watched the French film entitled "8 femmes" and were certain that we could be greatly successful in creating our own interpretation of the script. Before we even began, the director asked us to decide whether we wanted to have an acting role or a backstage role. After the rough job descriptions of each role were briefly explained to us, we were asked to research the job of our choice and present our findings in an interview. ...read more.

Thus began the construction of the main living room. All walls, doors, nooks and crannies needed to be wallpapered a shade of deep green, stairs needed to be created, doors hinged and curtains hung. The organising and co-ordination of all rehearsals and performances were done by our reliable stage manager. She lead our team and the environment we were to develop or production in. She conducted rehearsals; ensured props and equipment needed were available; gathered records and necessary permission forms; and ensured that all technical aspects of the production ran smoothly. Sound and lighting was designed by our director and then operated by a volunteer who was eager to join our community and be involved in such a great production. Our costume manager began developing the costume designs, making sure that the costumes were going to correlate to the director's concept. The costume manager was very successful in illuminating each characters traits and personalities by what they were to be wearing. Our make-up manager had a simular task as the costume manager but was to use each actor's face, hair, hands and any other visible body parts. ...read more.

After their job getting cancelled and no trees, I then went with a trailer to collect my promised branches. After being disappointed again, I recruited some fellow class members and went on a dead tree search and bought them back to the school. My original plan was to have this area covered with trees so it was almost forest like but after my small draw back I improvised and overcame this hitch by filling in gaps with a bench and bird baths. After a design being approved by the director for my posters, programs and tickets, I copied and distributed them. During technical and dress rehearsals, the director continued to have input with designers and I had to assign people to help run the performance on the nights as I needed people to assist with backstage activities. Over the journey of "8 women" every member of the cast learned that there are many small jobs involved in presenting a performance. Positive feedback from our audience was appreciated and friends and family who saw our play were immensely impressed. Overall, "8 women" was a success for not only us as individuals but also as a group. We all thoroughly enjoyed out time working together and had a lot to show for our hard work. Group Production Report "8 women" ...read more.