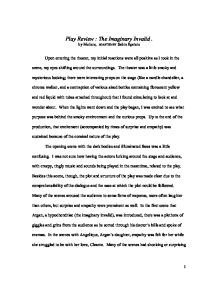 Play Review : The Imaginary Invalid . by Moliere, ADAPTED BY Sabin Epstein Upon entering the theater, my initial reactions were all positive as I took in the scene, my eyes shifting around the surroundings. The theater was a little smoky and mysterious looking; there were interesting props on the stage (like a candle chandelier, a chrome walker, and a contraption of various sized bottles containing florescent yellow and red liquid with tubes attached throughout) that I found stimulating to look at and wonder about. When the lights went down and the play began, I was excited to see what purpose was behind the smoky environment and the curious props. Up to the end of the production, that excitement (accompanied by times of surprise and empathy) was sustained because of the comical nature of the play. The opening scene with the dark bodies and illuminated faces was a little confusing. ...read more.

The scene was outrageous; the doctor's speech was very loud and exaggerated, as was his wardrobe, and there was an added element of absurdity with saliva spewing this way and that out of the doctor's mouth as he shouted at Argan. Because the play was filled with scenes of this nature and because most of the play was a little outrageous, it was effective in arousing audience response and captivating my interest throughout the performance. In order to successfully express emotions and ideas, the actors used body movements, voice, and facial expressions wonderfully. A perfect example of one actor utilizing all three would be the character of Thomas Diafoirus. Just out of schooling to become a doctor, Thomas reflects a goofy, savage-like facial expression. He is presented to the audience like an animal also through his slouching and savage-like mannerisms, not to mention the fact that his father would crack a whip on him at any given hint of misbehavior. ...read more.

This was an excellent way of showing the difference between characters. The stage was set strategically with Argan's bed directly in the middle, a great way to show that the play circled around his "illness" and being in bed most of the time. The props I mentioned at the beginning (the candle chandelier, the chrome walker, and the contraption of bottles containing liquid and tubes) were dangling about the actors on rope. This was a clever way of decorating Argan's room with symbols of his hypochondria. The costumes worn and the design of the set worked well together in setting an appropriate mood and style for the production. Overall, I really liked this play and thought that the production was done very well. I enjoyed most of all the comedic elements of the play, it was good to laugh and sit through something that was not in a serious tone. I especially thought it a treat to see the audience around me enjoying the performance as much as I was. 1 ...read more.