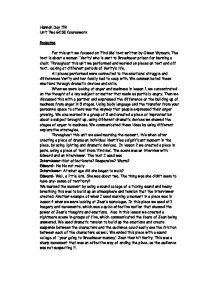 Response to 'Find Me' text written by Olwen Wymark.

Hannah Day 11R Unit Two GCSE Coursework Response For this unit we focused on 'Find Me' text written by Olwen Wymark. The text is about a woman ' Verity' who is sent to Broadmoor prison for burning a chair. Throughout this unit we performed and worked on pieces on text and off text, looking at different periods of Verity's life. All pieces performed were connected to the emotional struggle and differences Verity and her family had to coop with. We communicated these emotions through dramatic devices and skills. When we were looking at anger and madness in lesson 1, we concentrated on the thought of a key subject or matter that made us partially angry. Then we discussed this with a partner and expressed the difference or the building up of madness from anger in 5 stages. Using body language and the transfer from your personnel space to others was the keyway that people expressed their anger growing. We also worked in a group of 5 and created a piece of improvisation about a subject brought up, using different dramatic devices we showed the stages of anger to madness. We communicated these ideas by using different explorative strategies. Throughout this unit we used marking the moment, this when after creating a piece of drama an individual identifies a significant moment in the piece, by using lighting and dramatic devices. In lesson 2 we created a piece in pairs, using a piece of text from 'find me'. ...read more.

We also concentrated on Narrating; in 'Find me' there is a narrator. The role of the narrator is to inform the audience of what is happening in the performance and to remind the audience that this is a true story and what actually happened to Verity. The narrator introduces the play and what happen to Verity and why she is in the position she is in. The narrator talks to the audience in 4th wall and informs the audience of Verity's future. The narrator performs the same monologue at the end of play. This reminds the audience once again that this is a true story of a young child that went through all this pain and suffering. During lesson 5 in-groups of 6 we created a piece of drama using the monologue. With the idea of gossip we created a piece that used the text as guidelines but had a realistic twist on how people get the facts wrong and make the story more interesting. We used dramatic tension in this piece when characters began to taunt someone about her past. Using the words 'neetz' we built up an atmosphere and tension between characters. Still imagery was also used during the unit; this was used as a device to mark the moment or for another piece to carry on. We created a piece in fours, using a scene from 'find me'. ...read more.

Verity performed movements and vocal skills that portrayed Verity as a character and was noticeable. We used lighting in the monologue piece to create an atmosphere, with a very simple whitewash. This was to show how Jean was stricken of all walls and presenting her raw emotions to the audience about her life as Verity's mother. If we had more time on lighting I feel we should have used a red spotlight on the character Verity, and a white wash over everyone else. This would represent the main problem of the family and how Jean feels that she is a danger in many ways: her self, the family, the embarrassment of her behaviour etc. We brought the piece to climax when the blank characters performed their movements; the atmosphere built up by sound and the sharp-ridged actions. The climax was then brought down by Jean calmly speaking but raising her tone to build the tension up again. One group used props that was very effective, They presented them selves on a number of levels and passed a wine bottle when they spoke. This made it easy for the audience to see who was Jean at what time. They also used baby food as vomit. Everyone up line one at a time created an image that represented vomiting. The final person was sick using the baby food this was very effective and caught the audience by surprise that made the piece very successful as the audience was still intrigued by the performance. ...read more.