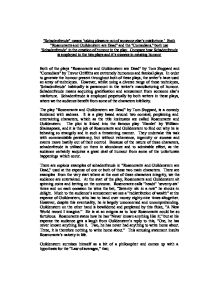 &quot;Schadenfreude&quot; means 'taking pleasure out of someone else's misfortune.' Both &quot;Rosencrantz and Guildenstern are Dead&quot; and the &quot;Comedians,&quot; both use Schadenfreude in the creation of humour in the play. Compare its use in the two plays and it's success at

It is utilised to manufacture two characters that are unusually likeable to the audience. This is a very subtle but exceptionally clever literacy technique used by Stoppard in the play. Despite their lack of prosperity in the task that they are set to conduct in the play, they yield to their embarrassment and mocking in an excellent manner. Hence, in the end they are portrayed as exceedingly amiable characters to the audience, who are in the end sad to see their decease. With these two characters involved, along with their fastidious natures, Schadenfreude is consequently used in abundance in this play and in my assessment to marvellous effect in creating humour. I feel that schadenfreude is used perpetually in this play to put across serious points, as well as the synthesis of humour. Pragmatism means the reliance upon experience and practical possibility rather than upon principles worked out in advance of, and used in order to decide upon action. If these two characters had been more pragmatic in the way they set about trying to ascertain the reason for Hamlet's melancholy, then they may have been far more successful. Stoppard's serious point here, which uses schadenfreude as a device to express it, is that you should be pragmatic and decisive in life and not reflect on things too much as otherwise you will never get anywhere. I feel Stoppard inventively points out how we should not ponder on philosophies too much. In trying to work out the explanation to things which we will never know the true answer to anyway (for example Guildenstern's philosophy on fate, or probability), Stoppard feels we will spend most of our life thinking about things rather than actually making progress and really living life. Before both Rosencrantz and Guildenstern are about to be executed, Rosencrantz asks "We've done nothing wrong have we?" Guildenstern's reply, "I cannot remember" backs up the point that he has got so implicated in contemplating and being reflective over certain things, that he cannot actually remember what he has done in life, and whether or not any of it was 'wrong.' ...read more.

In order to really create humour and make an audience laugh, the characters involved must make a joke out of themselves. It is far more successful to do this rather than mocking and embarrassing other cultures like the Irish and the Jewish, or particular races that may have a different coloured skin. This is why in my opinion "Rosencrantz and Guildenstern are Dead" is the more successful play with the way that it utilises schadenfreude to manufacture humour. It uses it to mock the characters that it has in the play, in order to amuse the audience. When it is the characters who are the victims of schadenreude and the audience gets a laugh at their expense, then the readers or watchers of this play will not be hurt or embarrassed. However, because "Comedians" uses schadenfreude at the misfortune of certain cultures and races, then for many this will prove humiliating and hence not funny. The fact that Challenor who has lots of experience as to how to be really funny in front of an audience, at one stage in his analysis of the comedian's performance says, "The Cardinal sin for any performer is embarrassing the audience. You had 'em doing up their shoelaces and picking up old beer mats," exemplifies this point. Because Griffiths here is pointing out what is and isn't funny to the audience, this therefore possibly shows that he has purposefully used schadenfreude in this manner to portray a salient message. This is that to try and get a laugh at the expense of cultures or races is a totally inappropriate method, as was found out by particularly the character of Price in the "Comedians." It is by mocking and ridiculing the characters that are involved in the play, as is done to magnificent affect in the "Comedians," which is the method that the audience finds most humorous. It is for this reason that I think "Rosencrantz and Guildenstern are Dead" is the most humorous play and is the most successful at utilising schadenfreude of the two. ...read more.