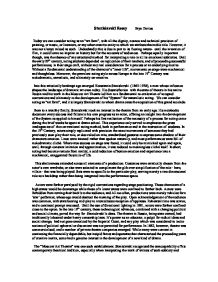 Stanislavski Essay Bryn Davies Today we can consider acting as an "art form", with all the dignity, nuance and technical precision of painting, or music, or literature, or any other creative entity to which we attribute that noble title. However, it was not always valued as such. Undoubtedly this is due in part to its fleeting nature- until the invention of film, it could leave no imprint on history but for the accounts of audiences. Perhaps equally important though, was the absence of any structured method for interpreting a role in all its emotional subtleties. Until the early 20th century, acting students depended on replication of their teachers, and of proceeding successful performances, in their stage craft, without any real consideration for a process or an underlying motive. Without a fundamental understanding of the character's "inner life", movements on stage were mechanical and thoughtless. Moreover, the prevalent acting style across Europe in the late 19th Century was melodramatic, unrealistic, and ultimately un-emotive. Into this artistically bankrupt age emerged Konstantin Stanislavski (1863-1938), a man whose influence shapes the landscape of dramatic art even today. His dissatisfaction with the state of theatre in his native Russia and his work in the Moscow Art Theatre led him to a fundamental re-evaluation of accepted conventions and ultimately to the development of his "System" for naturalistic acting. ...read more.

Rehearsal time was scarce, and a continual prompt was used. Until the use of directional lighting in 1881, actors were further confined close to the apron. In the late 19th century, these technological advances, combined with a changing political and social climate, paved the way for Stanislavski's ideas. The theatre in Russia, being state owned, had traditionally laboured under heavy censorship laws. It's power as an educator, a pulpit for radical ideas and social change, had not gone unnoticed by the Imperial Court, and any play which was considered to incite notions of political upheaval or discontent was not permitted for performance. In 1882, however, theatre was commercialised, and a number of private theatre companies emerged. While many were content in continuing the financially dependable, but insipid farces and operettas that characterised the proceeding years of creative inertia, some had a genuine interest in the development of a new kind of drama. The "Moscow Art Theatre" was one such establishment. Stanislavski recognised the unacceptability of his contemporary theatrical tradition, especially when interpreting the work of writers of such subtlety and psychological depth as Anton Chekhov. Indeed, the inadequacies of a traditional approach to productions was exemplified by the disastrous first performance of Chekov's The Seagull at the Alexandra Theatre in 1896. However, When Stanislavski himself revived the play two years later at the Moscow Art Theatre, applying to Chekhov's nuanced characters the emotional honesty and artistic integrity of his emerging System, it was considered an unequivocal triumph. ...read more.

He could not be content with offering them "a funny anecdote", but felt compelled to satisfy their "spiritual needs". The Meiningen Company were another influence on Stanislavski's ideas. Touring Europe, the company's influence was widely felt across the continent. Having first seen the well disciplined, ensemble-style group in 1891, Stanislavski was inspired in his quest for a unified "coherent" production. Anton Chekhov (1860-1904) was undoubtedly a powerful catalyst to Stanislavski's work. His plays offered the psychological realism to which the System lends itself. "Let (the theatre) be as complex and as simple as life itself. People dine and at the same time their happiness is made or their lives are broken." Stanislavski's struggle to comprehend and express on stage the subtext and delicacy of Chekhov's writing is inextricably tied to the evolution of the System itself. Stanislavski believed the theatre should not be a thoughtless approximation of the surface of life, but an exploration of an internal reality, a spiritual guide, a profound, beautiful and human thing. "What is important to me is not the truth outside myself, but the truth within myself." The 20th century was born into a changing world- of technology, of industrialization, of revolution. Stanislavski's System would survive all these, its artistic integrity unbroken, an organic pursuit for a theatre of truth. ""Learn to see, hear, love life - learn to carry this over into art, use it to fill the image you create for yourself..." - Konstantin Stanislavski ...read more.