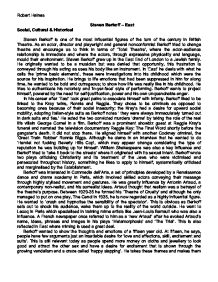 Steven Berkoff - East Social, Cultural & Historical Steven Berkoff is one of the most influential figures of the turn of the century in British Theatre. As an actor, director and playwright and general nonconformist Berkoff tried to change theatre and encourage us to think in terms of 'Total Theatre', where the actor-audience relationship is immediate and where the actors, through expressive physicality and language, mould their environment. Steven Berkoff grew up in the East End of London to a Jewish family. He originally wanted to be a musician but was denied that opportunity, this frustration is conveyed through his acting as uses his body like an instrument. In 'East' he deals with what he calls the 'prime basic elements', these were investigations into his childhood which were the source for his inspiration. He brings to life emotions that had been suppressed in him for along time, he wanted to be bold and outrageous; to show how life was really like in his childhood. He tries to authenticate his notoriety and 'in-yer-face' style of performing. Berkoff wants to project himself, powered by the need for self-justification, power and his own unquenchable anger. In his career after 'East' took great pains to associate himself with infamy. Berkoff liked to be linked to the Kray twins, Ronnie and Reggie. ...read more.

This is also reflected in East where miming is used a great deal. Berkoff wanted to show the thoughts and emotions of a fifteen year old. At fifteen, he says, people have few arguments just an insatiable desire for 'love and affections, skill, excitement and suits'. This is still relevant today as people spend more money on cloths and jewellery to look good and attract the other sex and have a desire for excitement that is shown through the growing vandalism and a craze called 'happy slapping'. He takes these themes and makes them into 'mythic symbols' to get rid of the day-to-day naturalism or realism of normal theatre and wake people up. It was an attempt to be bold, daring, outrageous enabling me to confess my innermost thoughts...just as we did as teenagers'. He wrote 'East' in a mood of excitement and frivolity. Berkoff wrote it to be bold and to challenge the established naturalistic theatre and establishment. Throughout his plays, in the words of Dominic Dromgoole, he 'rants and rages', although what it is he is angry with is sometimes unclear. Most of the time it is just 'them', maybe the ruling classes, the parasitic, the inauthentic or it could be all of them. Above all Berkoff is alive. There may be no coherent intellectual message in his plays, but his anger is real and substantial. ...read more.

The society we live in has created an intellectually bankrupt middle-class of people who have well paid jobs, mostly extremely tedious or containing some health hazard, just so that they can go home and watch Season 3 of Desperate Housewives on widescreen with surround sound. These people did want to escape from their material and intellectual poverty, but failed; they managed to get a reasonable salary and are satisfied with money and ignorance. Steven Berkoff is, although marginalised by much of the mainstream establishment, an undeniable influence on contemporary theatre, particularly up-and-coming generation of actors, playwrights and directors. 'East' is cited as the main influence for the 'in-yer-face' theatre phenomenon of the 1990's, particularly plays like 'Trainspotting', Harry Gibson's stage adaptation of Irvine Walsh's book. He is also credited with bringing more young people to the theatre by providing it with a 'shot up the arm' which allowed it to shake off the shackles of naturalism. In 1999 it was the twenty-fifth anniversary of East, Berkoff celebrated by having 'East' performed in the Vaudeville Theatre, thereby bringing the 'East End' to the West End and thus achieving some sort of establishment recognition. Paradoxically, this was what he wants to be renowned, to be heard. Berkoff has no serious agenda for change; he is not a socially conscious playwright and actor desiring to change the views of his audience. He is powered by the desire to express his 'self'. He has not been involved in anything seriously beyond his own ego. ?? ?? ?? ?? Robert Haines ...read more.