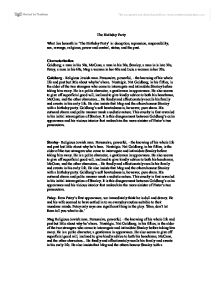 The Birthday Party What lies beneath in 'The Birthday Party' is: deception, repression, responsibility, s*x, revenge, religious, power and control, status, and the past. Characterisation Goldberg, a man in his 50s, McCann, a man in his 30s, Stanley, a man in is late 30s, Petey, a man in his 60s, Meg a woman in her 60s and Lulu a women in her 20s. Goldberg - Religious Jewish man. Persuasive, powerful, - the knowing of his whole life and past but little about why he's here. Nostalgic. Nat Goldberg, in his fifties, is the older of the two strangers who come to interrogate and intimidate Stanley before taking him away. He is a polite character, a gentleman in appearance. He also seems to give off superficial good will, inclined to give kindly advice to both his henchman, McCann, and the other characters... He fondly and affectionately recalls his family and events in his early life. He also insists that Meg and the others honour Stanley with a birthday party. Goldberg's soft heartedness is, however, pure sham. ...read more.

He also seems to give off superficial good will, inclined to give kindly advice to both his henchman, McCann, and the other characters... He fondly and affectionately recalls his family and events in his early life. He also insists that Meg and the others honour Stanley with a birthday party. Goldberg's soft heartedness is, however, pure sham. His outward charm and polite manner mask a s******c nature. This cruelty is first revealed in his initial interrogation of Stanley. It is this disagreement between Goldberg's calm appearance and his vicious interior that makes him the more sinister of Pinter's two persecutors. Language 'The need to verification is understandable but cannot always be satisfied' The language in the play is naturalistic stylised idiom. Although the playwright is absurd it follows the rhythm of everyday speech, for example, in the first scene with Meg and Petey, there is a very realistic conversation between them although it is the script is odd and absurd which engages the audience. The language in 'the birthday party' is both absurd and naturalistic; absurd meaning its unnatural, random, challenges the norm by deviating from it but still uses everyday language. ...read more.

There is no justification, and has an ambiguous ending leaving the audience still with questions for example 'where is Stanley taken?' or 'who are Goldberg and McCann?' An exercise we did in class to explore the themes, structure of form of 'The Birthday Party' was where we listened to 4 pieces of music, all very different, and write down images, ideas or thoughts. The first piece was classical song which was slow, sad, quite dark, involves a structure and a climax. The reason it relates is the classical but thriller style of the play. The second piece of music was jazz piece, which we came to the decision of it being the freedom and reactionary part of the play, also twisting the play; Pinter is reconstructing the classical well-made play. The third piece sounded distorted, uneasy which conveys the distorted and ambiguous structure of the play. The play seems to be about nothing Piece 4 sounded chaotic, manic, depressing, it connects with Pinterland which is absurd, peculiar, odd, where it is alike the sound of piece 4. It is original and different, which gives it a sense of isolation. ...read more.