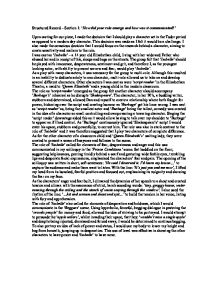 Structured Record - Section 1: 'How did your role emerge and how was it communicated?' Upon casting for our piece, I made the decision that I should play a character set in the Tudor period as apposed to a modern day character. This decision was made as I felt it would be a challenge. I also made the conscious decision that I would focus on the research behind a character, aiming to create sensitivity and realism to the role. I was cast as 'Isobelle' - a 14 year old Elizabethan child, living with her widowed Father who abused her and in receipt of this, sleeps and begs on the streets. The group felt that 'Isobelle' should be played with innocence, desperateness, sentiment and grit, and therefore I, as the youngest looking actor, with ability to present sorrow and fear, would play 'Isobelle'. As a play with many characters, it was necessary for the group to multi-role. Although this resulted in an inability to dedicate solely to one character, multi-role allowed us to take on and develop several different characters. Other characters I was cast as were 'script reader' in the Elizabethan Theatre, a maid to 'Queen Elizabeth' and a young child in the modern classroom. The role as 'script reader' emerged as the group felt another character should accompany 'Burbage's' rehearsal as he disrupts 'Shakespeare'. The character; in her 30's, a budding writer, stubborn and determined, allowed Dan and myself to create a relationship where both fought for power, bickering over the script and creating humour as 'Burbage' got his lines wrong. I was cast as 'script reader' as, being the smallest actor and 'Burbage' being the tallest, comedy was created in the idea of a character so small controlling and overpowering a towering character. Staging the 'script reader' downstage aided this as it would allow having to talk over my shoulder to 'Burbage' to appear as if I had control. ...read more.

Stanislavski states that: 'Tension is an actors greatest enemy, it pinches the voice, stiffens the muscles, shortens the breath and blocks the mind'. (An Actor Prepares) To ensure the group were relaxed before performances we used slow, deep breathing techniques, which allowed us to focus on our own bodies and concentrate. In the 'Prison Conditions' scene, our aim was to create chilling recollections of each characters emotion with the use of just the voice. As the key to good voice work is relaxation, we relaxed the whole body; the neck, throat and tongue to ensure all resonators of the body were used correctly. Humming a comfortable middle range note, placing one hand on the head, the other on the chest as the note would rise in a smooth transition, from the stomach, through the chest and neck, to the head. This technique helped clear nervousness and helped free natural voices that were stuck in the throat or nasal area, presenting a strong quality of voice to perform with. A personal aim of mine was to adopt Morven Christie's (Romeo and Juliet - RSC) diction in her performance as Juliet, which allowed the audience to understand her clearly, and thus communicate with her. Knowing that it is easy for the voice to be lost on stage through mumbling, swallowing the words or talking fast, I would concentrate on clarity of diction with teeth and tongue exercises, working the jaw, cheeks, tongue, lips and teeth. This technique helped in portraying a clear sense of terror, innocence and anger for the character of 'Isobelle' in the 'Prison Conditions' scene. This scene called for each actor to present their own characters' individual expression and emotion; my characters' being pathos, helplessness and anger. In my soliloquy, I used physicality to offer a sense of helplessness. My body huddled, clinging to a headscarf, face peering out, and my shoulders hunched, almost animalistically, gave the impression of a timid, desperate character. ...read more.

'Sam's' shrills and boyish behaviour as he refused to dress as a girl added a huge amount of humour, primarily since he acted as the protagonist to which the audience can relate by being the modern child. One of our final scenes, set in prison, was a key scene for distributing an atmosphere of cruel, harsh, prison conditions. We planned for a confrontational look into the hardships of prison and felt that personal, sensitive monologues would communicate a sense of empathy whilst keeping the mood blunt, with a clear message. Each character, using just their monologue and not their bodies or surroundings to distract, would reveal the truth behind their prison sentences - many being dark, emotional and poignant, but some also being evocative, cruel, gory and cheeky. This allowed the audience to witness both gore and humour simultaneously, whilst still being exposed to the educational ideas. Humour seemed a huge technique to engage our audience - but we were very aware that it should not be the only way, and made it necessary to balance humour with sensitive, serious moments. Fortunately, this encouraged our humorous sections to be well appreciated, despite using comedy very rarely, only really in comparing, mimicking and accentuating the periods. 'Blackadder' style slapstick and comedic characters such as an eccentric Shakespeare, a tactless, blunt Wise Woman, a dim, witless actor and two modern children let loose in Tudor period helped us in keeping the play both humorous and relatable. These characters' over-the-top mannerisms and characteristics can be seen in modern day entertainment and life and this helped in creating an amusing link between our Tudor characters and the modern day. Our modern characters 'Debbie' and 'Sam' would also use modern references in portraying a clear comparison in the periods. In a fight with foolish actor 'Burbage', 'Sam' is handed a sword to which he responds with the Harry Potter line: 'Expelliarmus' and the fight sequence is encouraged by 'Pirates of the Caribbean' action music. This also encouraged dramatic irony and portrayed 'Sam' to have more power over 'Burbage'. ...read more.