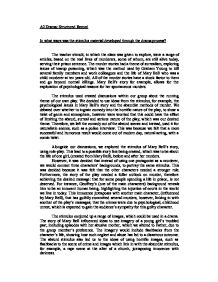 A2 Drama: Structured Record In what ways was the stimulus material developed through the drama process? The teacher stimuli, in which the class was given to explore, were a range of articles, based on the real lives of murderers, some of whom, are still alive today, serving their prison sentence. The murder stories had a theme of surrealism, exploring issues of teacup poisoning, which was the method used by Graham Young to kill several family members and work colleagues and the life of Mary Bell who was a child murderer at ten years old. All of the murder stories have a shock factor to them and go beyond normal killings. Mary Bell's story for example, allows for the exploration of psychological reasons for her spontaneous murders. The stimulus used created discussions within our group about the running theme of our own play. We decided to use ideas from the stimulus, for example, the psychological issues in Mary Bell's story and the absurdist methods of murder. ...read more.

This was decided because it was felt that the other characters needed a stronger role. Furthermore, the story of the play needed a fuller outlook on murder, therefore achieving the desired message: that for some people spending a life in prison, is not deserved. For instance, Geoffrey's (one of the main characters) background reveals him to be an innocent human being, highlighting the injustice of courts in the world we live in today. This innocence juxtaposes with another main character, (influenced by Mary Bell), that has guiltily committed several murders, however, linking in with another of the play's messages; that the crimes were due to psychological, childhood unrest, which is expected to gain the audience's sympathy for this guilty character. The stimulus conjured up a range of images, which could be used in a drama. The story of Mary Bell influenced ideas to use imagery of a young girl's troubled past, including episodes with her abusive mother, which we altered to Father, due to the group member's preference. ...read more.

When working on the child scene we have focused on the thoughts of the character, based on the hot seating activity, to gain effective characterisation. While in our group, we also used the activity of role-play. Using the stimulus, we developed a scene with each of us playing temporary characters from the story of Mary Bell. The scenes in which we explored involved issues from the protagonist's childhood, for example bullying at school and rape by her own father. They also involved images of Mary in prison as an adult giving her own thoughts on her murders. This activity has produced ideas to use a prison scene in the performance, leading to our decision to use three main characters and their backgrounds. Also using role-play to explore the horrific stimulus, we came up with a rape scene in a church. This involved repeated rehearsals, each time editing the acting until we had achieved efficient characterisation, meaning and message. This scene required a director's role for participants who were not acting and produced set characters by analysing who best fit the role. ...read more.