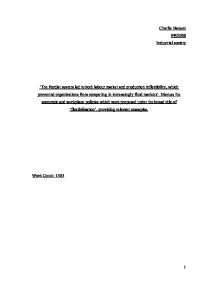 'The Fordist system led to both labour market and production inflexibility, which prevented organizations from competing in increasingly fluid markets'. Discuss

Charlie Hanson 0402968 Industrial society 'The Fordist system led to both labour market and production inflexibility, which prevented organizations from competing in increasingly fluid markets'. Discuss the economic and workplace policies which were proposed under the broad title of 'flexibilisation', providing relevant examples. Word Count: 1503 Between 1908 and 1929, Henry ford clearly established the linkages between division of labour and mass markets. His methods of mass production came under the title of 'Fordism'. According to Meyer (1981) Fordism 1908-1913 had four basic principles; standardised product design, extensive use of new machine tool technology, flow line production and the implementation of Taylorism in relation to work processes. Taylorism involved a general principle of the maximum decomposition of work tasks, the divorce of direct and so called indirect labour, by which meant setting up, preparation and maintenance tasks on machinery and the minimisation of the skill requirements of any task leading to the minimum job-learning times (Litter 1985). Taylorism therefore in its purest form involves deskilling. This is then reflected in the main policies of Fordism, the idea of taking skill away from the worker and transferring it to the use of machinery. ...read more.

He didn't order parts, procure his tools, repair his equipment, inspect for quality, or even understand what workers on either side of him were doing. Special repairmen re-paired tools. Housekeepers periodically cleaned the work area. Special inspectors checked quality, and defective work, once discovered, was rectified in a rework area after the end of the line. The role of the assembly worker had the lowest status in the factory. In some plants, management actually told assembly workers that they were needed only because automation could not replace them yet.' (Womack, Jones, and Roos 1990). The Fordist system of division of labour and the increased use of machinery, prevented there from being flexibility in production. Because the workforce was relatively unskilled, there ability to quickly adapt to change was hindered, as well as the long periods of time it took to adapt the machinery change in products and advancements was relatively limited. Henry Ford pushed job fragmentation to an extreme and also exploited the labour market. Ford stated that 'the jobs were classified to discover how many of them required the use of men with full capabilities. ...read more.

Fordist principles of division of labour and of de-skilling the labour force prevented there from being advancement and flexibility in production. Fordist economic principles also hindered production flexibility by not allowing fundamental changes in the design of the product. This would also limit competition between the organisations because innovation would be limited, and each firm would purely attempt to maximise their own outputs without attempting to advance their product because in the long run it would seem to be far too costly, due to the time it would take to raise production back up to its highest level of output. Reference: Ford, H, (1922) 'My Life and Work', Doubleday Page Grint, K, (1991) 'The sociology of Work', Blackwell Keat, R & Abercrombie, N, (1991) 'Enterprise Culture', Routledge Litter, C R, (1985) 'Taylorism, Fordism and Job design' D Knights et al Meyer, S, (1981) 'The Five Dollar Day: Labour Management and social control in the Ford Motor Company', 1908-21, State University of New York Press. Porter, H F, (1917) 'Four Big Lessons from Fords Factories', System 31 June Womack, James P, Daniel T Jones, & Daniel Roos, (1990) 'The Machine that Changed the World', New York: Rawson Associates. ?? ?? ?? ?? 1 ...read more.