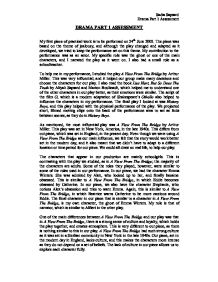 The piece was based on the theme of jealousy, and although the play changed and adapted

DRAMA PART 1 ASSESSMENT My first piece of practical work is to be performed on 24th June 2005. The piece was based on the theme of jealousy, and although the play changed and adapted as it developed, we tried to keep the performance set on this theme. My contribution to the performance was as an actor. My specific role was the ghost or one of the main characters, and I narrated the play as it went on. I also had a small role as a schoolteacher. To help me in my performance, I studied the play A View From The Bridge by Arthur Miller. This was very influential, and it helped our group make many decisions and choose the characters for our play. I also read the book Lies Hurt, But So Does The Truth by Aliyah Sapsard and Marion Boulicault, which helped me to understand one of the other characters in our play better, as their emotions were similar. ...read more.

This was because we wanted to keep the piece as realistic and grounded as possible. We wanted all of the situations in the play to be plausible, as the storyline was realistic. This is exactly the same in A View From The Bridge, but Arthur Miller draws on culture more to sustain plausibility. Each character was a serious character, as we felt that if we used comedy etc, we would not be able to convey each characters emotions to the audience properly. By studying A View From The Bridge, I was able to develop my piece greatly, and the themes and characters in the other play meant that each character could be adapted to suit the piece best. I was able to learn, not only about how to act my character, but also how to perform physically, and what stage directions to use. I was also able to explore my character more by studying characters from different plays, especially A View From The Bridge. Sadia Sapsard Drama Part 1 Assessment ...read more.