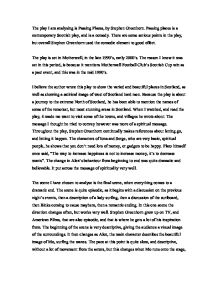 The play I am analysing is Passing Places, by Stephen Greenhorn. Passing places is a contemporary Scottish play, and is a comedy.

The play I am analysing is Passing Places, by Stephen Greenhorn. Passing places is a contemporary Scottish play, and is a comedy. There are some serious points in the play, but overall Stephen Greenhorn used the comedic element to good effect. The play is set in Motherwell, in the late 1990's, early 2000's. The reason I know it was set in this period, is because it mentions Motherwell Football Club's Scottish Cup win as a past event, and this was in the mid 1990's. I believe the author wrote this play to show the varied and beautiful places in Scotland, as well as showing a satirical image of west of Scotland hard men. Because the play is about a journey to the extreme North of Scotland, he has been able to mention the names of some of the remotest, but most stunning areas in Scotland. When I watched, and read the play, it made me want to visit some of the towns, and villages he wrote about. ...read more.

The beginning of the scene is very descriptive, giving the audience a visual image of the surroundings. It then changes as Alex, the main character describes the beautiful image of Mo, surfing the waves. The pace at this point is quite slow, and descriptive, without a lot of movement from the actors, but this changes when Mo runs onto the stage, and gets the audience ready for Binks's entrance. When Binks comes on, seen by the audience, but not the rest of the characters, it increases the audience's anxiety of what's going to happen next. Binks's scene is then very fast paced, dramatic, and extremely funny, although has serious undertones. The pace of the scene has slowly, changed throughout to this climactic ending. However Stephen Greenhorn cleverly brings the scene back to a slow and romantic conclusion. He leaves the audience with the image of love, and hope, again bringing back to the overall message of being happy with what you've got. Alex has most of the dialogue in the final scene. ...read more.

This is shown when he calmly asks Binks to "put down the gun". Shaper is also shown as a spiritual character in this scene; he can remain calm, because he is confident within himself. Mirren shows her keenness for Alex, in the conclusion of the scene, when she asks "what now". This shows she is interested in him, and her line "I'm going that way" confirms her desire to be with him. Brian, who initially came along for the ride, shows his development as a person when he agrees to take a job of "apprentice shaper", therefore putting his old lifestyle behind him. The language contributes to Binks arrival with the introduction of swearing for the first time in the scene. Prior to his arrival, no-one had sworn at all, but within a few seconds, Binks, Alex and Brian had all uttered at least one swear word. People that don't normally swear, only begin to do this when there are emotionally unstable, and having a gun pointed at you is one way of having these emotions. It also confirms Shapers coolness towards the situation, as he never swore once. Word Count 936 ...read more.