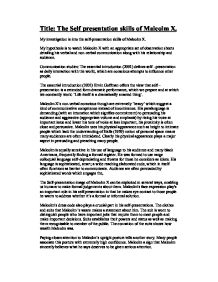 The Self presentation skills of Malcolm X.

Title: The Self presentation skills of Malcolm X. My investigation is into the self-presentation skills of Malcolm X. My hypothesis is to watch Malcolm X with an appropriate set of observation sheets detailing his verbal and non-verbal communication along with his relationship and audience. Communication studies: The essential introduction (2001) defines self -presentation as daily interaction with the world, which are conscious attempts to influence other people. The essential introduction (2001) Ervin Goffman offers the view that self - presentation is a extended form dramatic performance, which we prepare and at which we constantly work: 'Life itself is a dramatically enacted thing'. Malcolm X's non-verbal conscious though are extremely 'heavy' which suggest a kind of communicative competence instead of incontinence. ...read more.

Malcolm is equally sensitive in his use of language to his audience and many black Americans, frequently finding a formal register. He was formed to use range colloquial language self-depreciating and frowns for those he considers as idiots. His language is sophisticated, smart; a wide reaching elaborated code, which in itself often functions as barrier to communicate. Audience are often persuaded by sophisticated words which engages the, The Self-presentation image of Malcolm X can be exploited in several ways, enabling us humans to make formal judgements about them. Malcolm's face expression play's an important role in his self presentation in that he makes eye contact to those people he wants to address whether it's a formal or informal solution. ...read more.

Many people associate this posture with extremely high confidence. Malcolm a sign that Malcolm sincerely believes what he says deserves to be given serious attention. Malcolm 's facial expression is exposed frequently throughout he interview, where he tends to tighten his lips around the mouth and lower his eyebrows. According to Desmond Morris (1994) in the essential communication studies, these are the correct action of feeling angry and aggressive. By conclusion it is possible to construct something like a model of the ideal or at least a potentially successful, leaders. It would probably start with motivation having a clear idea that leader is what you need to become a leader. If you want to become a successful and effective it ought to inform your non-verbal to promote a good impression. Malcolm makes clear eye contact with his fellow audience, which associate Malcolm as a great leader ...read more.