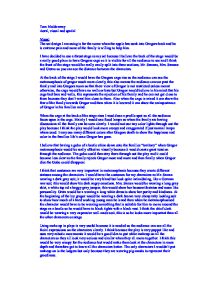 The set design I am using is for the scene when the apple has sunk into Gregors back and he is extreme pain and none of the family is willing to help him.

Tom Muldowney Aural, visual and spatial Visual The set design I am using is for the scene when the apple has sunk into Gregors back and he is extreme pain and none of the family is willing to help him. I have decided to use a thrust stage as my set because I believe the back of the stage would be a really good place to have Gregors cage so it is visible for all the audience to see and I think the front of the stage would be really easily split into three sections, Mr. Samsas, Mrs. Samsas and Gretas so you can see the distance between the characters. At the back of the stage I would have the Gregors cage rise so the audience can see the metamorphosis of gregor much more clearly, this also means the audience can see past the family and into Gregors room so that there view of Gregor is not restricted unless meant otherwise, the cage would have no walls or bars but Gregor would believe ...read more.

I would have the costumes for my characters as Mr. Samsa wearing a dark gray suit; it would be very bland but look quite intimidating, like a German war suit, this would show his dark angry emotions. Mrs. Samsa would be wearing a long gray skirt, a white top ad a baggy gray jumper, this would show her housewife status and mum like personality. Greta would be a wearing a long white dress to show her purity and kindness. At the beginning of the lay gregor would be wearing a dark brown very cheap tatty looking suit to show how much of a hard working young man he is and then when he metamorphosised the character would have to be wearing something that is suitable for him to move around the stage as a beetle so he would have to black tights with a black vest. I think the chief clerk would be wearing a very expensive well-made suit, this is so he looks more important than all the other characters on stage. ...read more.

Depending on the size of the theater is whether or not I would use microphones, if the theatre was small enough I would rather have the characters speak with out microphones because it would make the mood of the play better and make you think your watching the play when it was set and not in present time. Spatial With the stage I am using there would be enough space to slit the stage up so each character can dominate part of the stage. I would have Gregors cage really big so when it is raised it dominates most of the space and shows the fear among the family. The family are used most through out the play weather to show their own feeling or Gregors they are almost always being used so I would have them at the front of the stage, this means they are closer to the audience which means the audience can get to know the individuals better and watch them change as the play develops. ...read more.