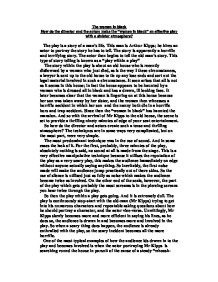 The women in black

The women in black How do the director and the actors make the "women in black" an effective play with a sinister atmosphere? The play is a story of a man's life. This man is Arthur Kipps; he hires an actor to portray the story he has to tell. The story is apparently a horrific and terrifying story. The actor then begins to tell the old man's story. This type of story telling is known as a "play within a play" The story within the play is about an old house who is recently dis0owned by a women who just died, as is the way I these circumstances, a lawyer is sent up to the old house to tie up any lose ends and sort out the legal material involved in such a circumstance. It soon arises that all is not as it seems in this house; in fact the house appears to be haunted by a women who is dressed all in black and has a drawn, ill looking face. ...read more.

So inevitably, the first noise made will make the audience jump practically out of there skins. So the use of silence is utilised just as fully as noise which makes the audience become twice as involved. On the other end of the scale, however, the part of the play which gets probably the most screams is in the piercing scream you hear twice through the play. So then the play within a play gets going. And it is extremely dull. The play is continuously stop-start with the old-man (Mr Kipps) trying to get into his numerous characters and repeatable asking questions about how he should portray a character, and the actor vice-versa. Unwittingly, Mr Kipps slowly becomes more and more efficient in saying his lines, as he does so, the audience is drawn in and becomes more and involved in the play. So when a scary thing does happen, the audience is already enthralled with the play, so the scary incident becomes all the more horrific. ...read more.

Subconsciously this affects the audience as well, because with each change in lighting certain aspects of the stage are illuminated. What you thought was a thick black curtain suddenly reveals a very creepy children's nursery, so this makes the audience assume that what appears to be there probably isn't what it seems, so you are permanently expecting something to jump out from the shadows making the most mundane of accidents, kicking a bucket (could b symbolic), for example, seem like the trap door being let down on the gallows of child criminal. Appropriately, the last technique used is retrospect. For days after everyone who had seen the play were continually realising what had actually happened in the play. This prolonged the scary effects of the play, and actually prevented me from sleeping. In conclusion the "women in Black" was a play which reduced the audience to dribbling puddles of wobbling, terrified children. It affected me for days after and the affects are still with me. And best of all, it made David Wynter scream. ...read more.