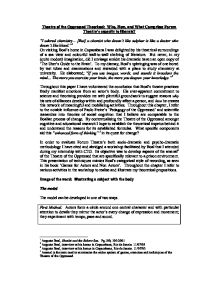 Theatre of the Oppressed Theorised: Who, How, and What Comprises Forum Theatre's capacity to liberate?

Theatre of the Oppressed Theorised: Who, How, and What Comprises Forum Theatre's capacity to liberate? "I adored chemistry... [But] a chemist who doesn't like sulphur is like a doctor who doesn't like blood."1 On visiting Boal's home in Copacabana I was delighted by his theatrical surroundings of a sea view and colourful wall-to-wall shelving of literature. But never, in my (quite modest) imagination, did I envisage amidst his dramatic haven an open copy of 'The User's Guide to the Brain'. To my dismay, Boal's upbringing was of one bored by test tubes and examinations and rewarded with a place to study chemistry at university. He elaborated; "If you use images, words, and sounds it broadens the mind... The more you exercise your brain, the more you deepen your knowledge."2 Throughout this paper I have volunteered the conclusion that Boal's theatre practices freely manifest emotions from an actor's body. His ever-apparent commitment to science and theorising provides me with plentiful groundwork to suggest reasons why his sets of alliances develop within and profoundly affect a person, and how he creates this network of meaningful and mobilising activities. Throughout this chapter, I refer to the notable influence of Paulo Freire's 'Pedagogy of the Oppressed' and scientific researches into theories of social cognition that I believe are comparable to the Boalian process of change. By contextualising the Theatre of the Oppressed amongst cognitive and educational research I hope to establish the theoretical impetus behind it and understand the reasons for its established formulas. What specific components aid this "enhanced form of thinking"3 in its quest for change? In order to evaluate Forum Theatre's both socio-dramatic and psycho-dramatic methodology I have cited and abridged a workshop facilitated by Boal that I attended during my internship with CTO. Its objective was to develop aspects of the arsenal4 of the Theatre of the Oppressed that are specifically relevant to a prison environment. ...read more.

But before a change within personal or social behaviour can be established, the actor must initially learn how to change. Cognition is the means that Boal favours to achieve this, where "We learn by our mistakes, we learn from example and...we learn from practice, practice, practice... Without consciousness there is no mental life, only mental processing."10 Significantly, in his workshop Boal asked participants to practise the habitual movements of their conditioned bodies, become conscious of their emotions 'love' and 'hate' and awaken to examples of physical awareness amongst their peers. Learning by direct experience enables people to construct new conceptions through the observation of behaviour that is modelled on the stage. Theatre of the Oppressed teaches an actor - a prisoner - how to learn his or her own capacity 'to think', 'to be', 'to imagine' and most importantly 'to transform'. The act of forum theatre aims to be the act of transformation and if, as is suggested above, we must learn to think before we can transform, then I must engage my research with the fundamental system that comprises teaching, learning and thinking. My next phase of research compares Boal's transitive, dialogic and cognitive investigation of the human being with the terms proposed by a revolutionary educatory system. "For me to exist Paulo Freire must exist."11 Boal adapted his practice of the Theatre of the Oppressed from his proclaimed inspiration, the educator Paulo Freire. Freire founded the transitive praxis that posits a learner as both subject and object as the solution to the anaesthetising authoritarian and oppositional approach to education. Like Boal, Freire strove to create a pedagogic recovery of humanity and liberation in the Brazilian society that is so "thwarted by injustice, exploitation, oppression, and the violence of the oppressors."12 In Freire's justification for his proposed alternative to the existing form of education, he established who the 'oppressed' were and why the act of liberation amongst them is difficult even beyond the practical limitations that society burdens them with. ...read more.