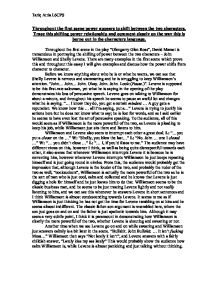 Throughout the first scene in the play &quot;Glengarry Glen Ross&quot;, David Mamet is tremendous in portraying the shifting of power between the two characters - John Williamson and Shelly Levene.

Throughout the first scene power appears to shift between the two characters. Trace this shifting power relationship and comment closely on the way this is borne out in the characters language. Throughout the first scene in the play "Glengarry Glen Ross", David Mamet is tremendous in portraying the shifting of power between the two characters - John Williamson and Shelly Levene. There are many examples in the first scene which prove this and throughout this essay I will give examples and discuss how the power shifts from character to character. Before we know anything about who he is or what he wants, we can see that Shelly Levene is nervous and stammering and he is struggling to keep Williamson's attention. "John... John... John. Okay. John. John. Look:(Pause.)". Levene is supposed to be this first-rate salesman, yet what he is saying in the opening of the play demonstrates his loss of persuasive speech. Levene goes on talking to Williamson for about a minute, and throughout his speech he seems to pause an awful lot and changes what he is saying. ...read more.

It seems to me as if Williamson is just thinking he has not got the time for Levene rambling on at him and he seems almost indifferent. The classic father-son argument is resembled here, where the son just goes on and on and the father is just apathetic towards him. Although it may seem a very subtle point, I think it is paramount in demonstrating how Williamson is clearly the more powerful of the two, whether Levene is shouting and swearing or not. Another time when we see Levene go on and on while swearing and Williamson just answers calmly is a bit later in the scene. "Bullshit. John Bullshit. ... It isn't f*****g Moss..." Williamson then says "Not lately it isn't", and Levene answers with a fairly childish answer, "Lately kiss my a*s lately" This would probably show the audience how calm Williamson is, while Levene is almost panicking and just talking without thinking. Levene then goes on another one of his speeches and throughout it he swears a great deal and is not really respectful to Williamson and the audience may think that he is the more powerful, however he is only ...read more.

Do I want pity? I want sits." , and then three pages later we see Levene saying "I'm asking you. As a favor to me? (Pause.) John. (Long Pause.) John: my daughter..." So we can see here that he is actually contradicting himself. The long pause is very significant, as I think Levene realises that he is not getting anywhere with Williamson, so he tries changing his approach by going for the sympathy vote, which still does not work. Again, although this is a fairly subtle point, it shows how dominant and powerful Williamson is over Levene as he makes Levene go round in circles and start to contradict himself just by letting Levene go on and on. So, I think it is fairly easy to see that Williamson is the more powerful of the two and although the audience may think that power is shifting throughout the scene, I think if we look more closely we can see how subtle things indicate that Williamson is the more powerful. The clearest example is when they are talking and Levene asks, "Why?", and Williamson replies, "Because I say so." ?? ?? ?? ?? Tariq Attia L6CPS ...read more.