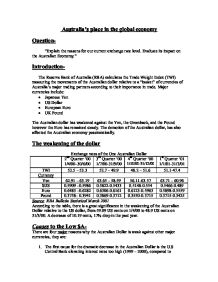 Australia's place in the global economy - &quot;Explain the reasons for our current exchange rate level. Evaluate its impact on the Australian Economy.&quot;

The Consumer Price Index (CPI) for All groups - March quarter 2001 recorded a 1.1% price rise in goods (Source: Sydney Morning Herald: CPI influenced by sharp increases in food prices: Costello - Jan Eakin 24/4/01). The CPI is a measurement of inflation, and with a price rise in all groups of 1.1%; this signifies that inflation is rising. All Groups (Assorted Goods in the basket) - CPI % Change March Qtr 99 - March Qtr 00 % Change Dec Qtr 99 - Dec Qtr 00 % Change March Qtr 00 - March Qtr 01 +4.9% 5.8% + 6 % Source: ABS AusStats 6401.0 Consumer Price Index March 2001 These figures show the price increases in the past year in All groups of products from March 99 - March 00, to March 00 - March 01 there was a 1.1% rise in price of goods. This trend shows that there is an increase in inflation through all groups of goods, all due to the low Australian dollar. The decline in the exchange rate has increased the demand for the Australian dollar, because of increased exportation products. As the demand for goods increases, the price will follow therefore resulting in higher prices of goods, which reflects on the CPI. Source: ABS AusStats 6401.0 Consumer Price Index March 2001 This graph shows the trend of the CPI increase, and further predictions show that inflation will keep rising. The low Australian dollar will keep the high inflation rate more persistent, which would result in prices of goods increasing and consumer confidence decreasing. ...read more.

The low Australian dollar has been and is going to be catastrophe for employment, with unemployment rising by 0.2% in March 2001. The trend predicts that the unemployment rate will continue to increase further. Source: Bureau of Statistics, Access Economics According to the graph it shows that in 2000 GDP and the working age population had dropped significantly and as the dollar decays further, it is predicted that the working age population will continue to fall. Implications to the Phillips Curve- New Zealand economist A.W Phillips proposed a theory that stated that inflation and unemployment are inversely proportional, that is if: Unemployment was high then inflation is low Or Unemployment was low then inflation was high The Phillips Curve illustrates this: Source: Year 12 Economics 2001 - Tim Riley According to Phillips theory, Australia does obey the inverse proportional relationships, which predicts the ramifications of the Australian micro and macro economy to be possibly disastrous in the future. The low Australian dollar has implicated into a situation, where further predictions for inflation and unemployment for the Australian economy are not encouraging. Note: Phillips Curve refers to the UNDERLYING inflation rate NOT the consumer price index.! Bibliography ABS AusStats -http://www.abs.gov.au RBA Reserve Bank of Australia - http://www.rba.gov.au Federation of Australia - http://www.fed.gov.au Egoli stockbrokers - http://www.egoli.com.au The Sydney Morning Herald - http://www.smh.com.au Australian BRW - January 13th 2001 issue & http://www.brw.com.au The International Monetary Fund IMF - http://www.imf.org The Financial Review - 23/4/01 Year 12 Economics 2001 - Tim Riley (c) 2000 Tim Riley Publications Australia's Place in the Global Economy Question- "Explain the reasons for our current exchange rate level. Evaluate its impact on the Australian Economy. ...read more.