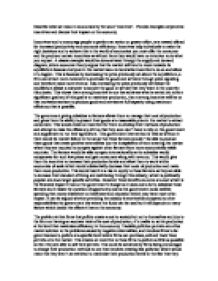 Describe what we mean in economics by the word incentive. Provide examples of perverse incentives and discuss their impact on the economy.

Describe what we mean in economics by the word 'incentive'. Provide examples of perverse incentives and discuss their impact on the economy. Incentives tend to encourage people to perform an action or greater effort, as a reward offered for increased productivity and economic efficiency. Incentives help individuals to make the right decisions and to achieve this in the world of economics you must offer the consumer and the producer certain incentives as without them they would have no intention to do what you request. A classic example would be demonstrated through the supply and demand diagram, where economic theory argues that the market will tend to move towards its equilibrium because everyone in the market has a remunerative incentive to do so and allow it to happen. This is because by decreasing the price previously set above the equilibrium, a firm can attract more customers to purchase its goods and services through price signaling and therefore make more revenue. Also increasing the price previously set below the equilibrium allows a customer to acquire the good or service that they want in the quantity they desire. ...read more.

This would give them the incentive to increase their production levels and allow them to work within economies of scale which would substantially decrease their costs of production and make them more productive. This would result in a rise in equity to these farmers as they are able to increase their standard of living and well-being through this subsidy, which is politically popular and does target specific activities. However these benefits do come at a cost which is the financial impact it has on the government's budget as it does cost a lot to subsidise these farmers and it raises the question of opportunity cost as the government could well be spending that money elsewhere on healthcare and education which may have more of an impact. It can be argued whether providing the subsidy is worthwhile compared to other responsibilities the government has where the funds can be used but it all depends on many factors which decide the effects it has on the economy. The problem is that firms that pollute create a cost to society but not to themselves and due to the firm not having an accurate view of its cost of production, it's unable to set its production at the level that maximises efficiency in the economy. ...read more.

The government implementing tradable pollution permits does create incentives for the firms and reduces the negative externalities that are created by firms. However in the long run, some firms may pollute heavily, and others may not, resulting in some areas of the world becoming highly polluted and others being relatively clean. Also it is difficult to measure exactly how much a firm is polluting and what pollution level is acceptable in the eyes of the government along with the administrative costs of controlling and monitoring the pollution levels of these firms. pointless. This would result in the consumption of the economy falling as less people are spending their money in the time of such high interest rates and therefore consumption would contribute less to aggregate demand. This would slow down the multiplier effect and therefore decrease GDP as expenditure falling would result in national income also falling meaning that real national output would also decrease as they are all equal. Incentives are crucial in economics as without it individuals would have no intention of making the decisions and performing the actions they do subconsciously. They all have different impacts on the economy as some incentives are stronger than others and hence are more influential. ...read more.