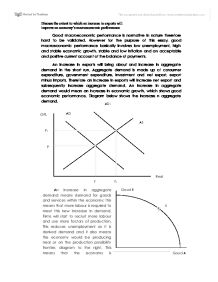 Discuss the extent to which an increase in exports will improve an economy's macroeconomic performance.

This essay engages with the question superbly. It was very impressive to see the essay start off so strongly stating that performance is a normative judgement, but goes onto define what they see it as to ensure a focused and ...

This essay engages with the question superbly. It was very impressive to see the essay start off so strongly stating that performance is a normative judgement, but goes onto define what they see it as to ensure a focused and sharp argument. This shows to the examiner that the essay has a true understanding and builds a critical voice early on. There is a sustained discussion of the consequences of an increase in export, both short run and long run. However, the question isn't directly answered. There is no discussion of "the extent to which" and therefore this essay cannot gain the top marks.

The essay in this essay is strong. What I particularly like is the progression of each point. For example it states "an increase in exports will bring about and increase in aggregate demand in the short run" but doesn't simply leave it there. It then goes onto say why this is the case, exploring the components of aggregate demand and then the effect with a diagram. The use of diagrams here is good, but it could be made stronger with a sentence or two explaining the diagrams. A simple sentence such as "An increase in exports causes aggregate demand to shift right from AD to AD1, then causing the real GDP to increase from Q to Q1." will gain credit as it displays a thorough understanding. The essay shows potential in answering the question, including "the effects are also dependent on other external forces such as multipliers in which a weak or negative multiplier would produce effects opposite to the benefits" right at the end. The key words here in answering this question are "depends upon". I always ask myself "will the same effects always happen?" which prompts a response which looks at a number of factors. This essay should've explored the multiplier effect, commenting on the size of the increase in exports affecting the improvement, and what external factors may hinder the macroeconomic performance.

This essay has a good structure. The introduction is brilliant, yet the conclusion is lacking in depth. A judgement is made, yet it is assertive and doesn't fully explain why they come to that conclusion. Unfortunately, doing so will gain little credit. The style is strong, allowing for a convincing argument. Technical terms are used confidently, and spelling, punctuation and grammar are strong.