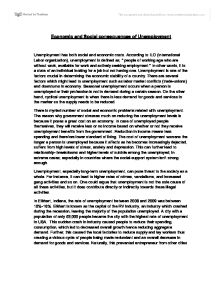 Economic and Social consequences of Unemployment

Economic and Social consequences of Unemployment Unemployment has both social and economic costs. According to ILO (International Labor organization), unemployment is defined as, '' people of working age who are without work, available for work and actively seeking employment.'' In other words, it is a state of an individual looking for a job but not having one. Unemployment is one of the factors crucial in determining the economic stability of a country. There are several factors which might lead to unemployment such as labor market conflicts (trade-unions) and downturns in economy. Seasonal unemployment occurs when a person is unemployed or their profession is not in demand during a certain season. On the other hand, cyclical unemployment is when there is less demand for goods and services in the marker so the supply needs to be reduced. There is myriad number of social and economic problems related with unemployment. The reason why government stresses much on reducing the unemployment levels is because it poses a great cost on an economy. In case of unemployed people themselves, they will receive less or no income based on whether or not they receive unemployment benefits from the government. ...read more.

This is best explained by the Phillip's Curve which is a graphical representation of the inverse relationship between inflation and unemployment. As one can see from the graph above, when unemployment raises, inflation falls and vice versa. Inflation also becomes the part of the cycle which cause the demand to fall and unemployment to rise. It was witnessed during the recent recession, in 2008, in America, when unemployment rose to about 6.1% from 4.7%; the inflation fell to 0.1% from 4.1%. Also, it is worth noticing that if unemployment strikes certain sections of a country, it can lead to social costs and benefits to th other parts of the country. For instance, if there is an increasing unemployment in north-west part of the UK, then the majority of working population will migrate to midlands, east and south of the UK in search for jobs. This will put pressure on the economy of those areas as there will be more population than before and a higher competition in those places to find jobs. Due to population overload and more and more people migrating, there is a threat of an increase in criminal activities and illegal practices. ...read more.

A country needs to have a low unemployment rate as an economy cannot work at full capacity as it won't be able to allocate resources in the most efficient manner and the resources are not available at full capacity at all times. In conclusion, the costs of unemployment on the economy and the society as a whole pose a huge problem for governments. Social costs such as increase in criminal activities, depression, suicide, criminal activities lead to other economic costs such as fall in consumption levels and the economic growth of the country slows down. Also, large- scale migration in certain areas of a country might pose a threat to its inhabitants, though it might prove to be beneficial for firms in the long-run as they will be able to hire more efficient and competetive workers. However, there can't be zero unemployment in any economy because once an economy reaches full capacity, workers will have to be laid off due to several reasons, such as poor resource allocation, jeopardizing of demand and supply cycle, etc. Therefore it is essential to have a small amount of unemployment in an economy, though higher rates of unemployment will prove to be a threat to society and economy. ...read more.

This essay responds superbly to the question, with lots of knowledge outside the syllabus being used. There is a sustained focus on the impacts of unemployment. I particularly liked the awareness of different types of unemployment, and how it can ...

This essay responds superbly to the question, with lots of knowledge outside the syllabus being used. There is a sustained focus on the impacts of unemployment. I particularly liked the awareness of different types of unemployment, and how it can affect particular regions. Although this essay doesn't prompt an evaluative response, it concludes by saying it is essential to keep unemployment low, showing a strong critical voice. Being able to make a justified judgement based on analysis is a great skill, and this essay does it well!

The analysis here is strong. For each point, the process is explained completely. Every step leads on from the last, showing a strong understanding of the concepts. Being able to do this will gain credit! I liked how there was reference to an aggregate demand and supply diagram, but I would've liked to have seen further analysis by referencing the shifts and changes in macroeconomic equilibrium. A simple sentence such as "An increase in unemployment can be seen as a shift in aggregate demand from AD to AD1. This causes the macroeconomic equilibrium real GDP to decrease from Q to Q1." would strengthen the argument when using a diagram. The inclusion of the Phillips curve introduces higher level concepts, and it was good to see some awareness of inflation being the trade off. Showing a strong understanding that there isn't a simple solution to decreasing unemployment makes for a perceptive argument. I liked how there was a number of examples used - in my experience, examiners will always credit for valid examples.

The structure in this essay is superb. There is a clear introduction offering an official definition on unemployment, then a conclusion which summarises the significance of keeping unemployment low. The style is incredibly sophisticated, with phrases such as "one could argue" and "it is believed" to show a number of interpretations can be valid. This makes the essay and its argument very convincing. Technical terms are used throughout, showing a strong understanding of economics. This essay is to be admired!