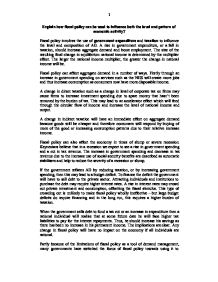 Explain how fiscal policy can be used to influence both thelevel and pattern of economic activity?

Explain how fiscal policy can be used to influence both the level and pattern of economic activity? Fiscal policy involves the use of government expenditure and taxation to influence the level and composition of AD. A rise in government expenditure, or a fall in taxation, should increase aggregate demand and boost employment. The size of the resulting final change in equilibrium national income is determined by the multiplier effect. The larger the national income multiplier, the greater the change in national income will be. Fiscal policy can affect aggregate demand in a number of ways. Firstly through an increase in government spending on services such as the NHS will create more jobs and thus increase consumption as consumers now have more disposable income. A change in direct taxation such as a change in level of corporate tax on firms may cause firms to increase investment spending due to spare money that hasn't been removed by the burden of tax. ...read more.

A rise in interest rates may crowd out private investment and consumption, offsetting the fiscal stimulus. This type of crowding out is unlikely to make fiscal policy wholly ineffective - but large budget deficits do require financing and in the long run, this requires a higher burden of taxation. When the government sells debt to fund a tax cut or an increase in expenditure then a rational individual will realise that at some future date he will face higher tax liabilities to pay for the interest repayments. Thus, he should increase his savings as there has been no increase in his permanent income. The implications are clear. Any change in fiscal policy will have no impact on the economy if all individuals are rational. Partly because of the limitations of fiscal policy as a tool of demand management, many governments have switched the focus of fiscal policy towards using it to improve aggregate supply as a means of creating the conditions for sustainable economic growth. ...read more.

Overall we have to consider both long run and short run effects of fiscal policy. Fiscal policy may have an impact on AD in the short run but it is unlikely to affect economic activity or the pattern of activity in the long run. However, the effect that fiscal policy has in the long run on the supply side of the economy is particularly important and has been applied today by present government. Over time we have seen a switch away from the use of fiscal policy as government tool for demand management and a turn towards its use as a supply side incentive. We also have to consider time lags. Fiscal policy may cause an increase in AD but it takes time to recognise that AD is growing either too quickly or too slowly. It then takes time to implement an appropriate policy. It takes time for the policy to work, as the multiplier process is not instantaneous. These time factors play a significant role when assessing the effectiveness of this policy. 1 ...read more.