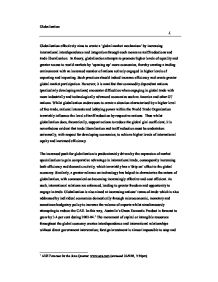 Globalisation 1. Globalisation effectively aims to create a 'global market mechanism' by increasing international interdependence and integration through such means as tariff reductions and trade liberalisation. In theory, globalisation attempts to promote higher levels of equality and greater access to world markets by 'opening up' more economies, thereby creating a trading environment with an increased number of nations actively engaged in higher levels of exporting and importing. Such practices should indeed increase efficiency and create greater global market participation. However, it is manifest that commodity dependant nations (particularly developing nations) encounter difficulties when engaging in global trade with more industrially and technologically advanced economies such as America and other G7 nations. Whilst globalisation endeavours to create a situation characterised by a higher level of free trade, national interests and lobbying power within the World Trade Organisation invariably influence the level of tariff reduction by respective nations. Thus whilst globalisation does, theoretically, support actions to reduce the global gini coefficient, it is nevertheless evident that trade liberalisation and tariff reduction must be undertaken universally, with respect for developing economies, to achieve higher levels of international equity and increased efficiency. The increased push for globalisation is predominately driven by the expansion of market specialisation to gain comparative advantage in international trade, consequently increasing both efficiency and domestic activity, which invariably has a 'drip on' effect to the global economy. ...read more.

Similarly, in nations with inefficient industry and work practices, the cost of production will inevitably be higher than in developed economies (excluding wage levels, which must be looked at in relation to the cost of living with each respective nation). Thus "Many of the poorest commodity- 3. dependant developing countries would benefit greatly, in terms of overall economic growth and poverty alleviation, if they were granted better access to developed-country markets."3 Developing nations are therefore disadvantaged when competing on the international stage, for whilst G7 and other dominant economies are able to define efficiency as their target and foremost goal, many developing economies are forced to concentrate on merely producing, not promoting the best conditions of trade or efficiency. Conversely, China has developed to become a major economic power within a short period of time under the system of Special Economic Zones that are an attempt to encourage foreign investment and capital. Whilst China's economic growth has expanded significantly, it is evident that wealth is concentrated in certain areas of the country, predominately along the coast creating "narrowing income equality"4, which is becoming a major economic problem for China and many other developing economies. ...read more.

Also, because of the inherent nature of tariffs, which are designed to protect domestic industry, nations are tentative in undertaking significant reforms, for such actions will expose inefficient industry to competition and quite possibly result in internal redundancies. Whilst globalisation in its purest form represents the ideal of free trade globally - in a perfectly competitive market economy - national and political interest will continue to subvert the process of trade liberalisation, with established economies predominantly benefiting from the current trend and developing nations struggling to meet such high levels of output in an equitable and efficient manner. 1 ANZ Forecast for the June Quarter: www.anz.com (accessed 22/9/03, 3:30pm) 2 Marie McKee and Ken Nailon. The 2003 Study Guide to Economics Units 3 and 4, Eighth Edition. (2003) (accessed 19/9/03, 2:30pm) 3 David Gruen (Reserve Bank of Australia) and Terry O'Brien (Department of the Treasury Australia) Does Globalisation Make The World More Unequal? (2001) (accessed 18/9/03, 8:40pm) 4 David Dollar. (accessed 18/9/03, (:00pm) 5 Reserve Bank of Australia Statistics: www.rba.gov.au/Statistics (accessed 21/9/03, 4:00) (sa: seasonally adjusted) 6 ANZ Economic Outlook (accessed 22/9/03, 5:00pm) 7 www.vcta.asn.au (accessed 23/9/03, 12:30pm) 8 Australian Department of Foreign Affairs and Trade, Exploding the Myths - Facts About Trade and International Investment. (accessed 19/9/03, 2:40pm) ...read more.