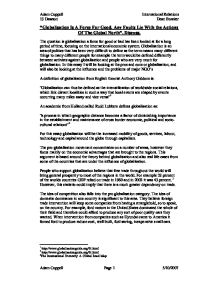 &quot;Globalisation Is A Force For Good, Any Faults Lie With the Actions Of The Global North&quot;, Discuss.

"Globalisation Is A Force For Good, Any Faults Lie With the Actions Of The Global North", Discuss. The question is globalisation a force for good or bad has been looked at for a long period of time, focusing on the international economic system. Globalisation is an area of politics that has been very difficult to define as the term means many different things to many different people for example the term would be defined differently between activists against globalisation and people who are very much for globalisation. In this essay I will be looking at the pros and cons or globalisation, and will also be looking at the influence and the problems of major NGO's A definition of globalisation from English theorist Anthony Giddons is: "Globalisation can thus be defined as the intensification of worldwide social relations, which link distant localities in such a way that local events are shaped by events occurring many miles away and vice versa"1 An academic from Holland called Rudd Lubbers defines globalisation as: "a process in which geographic distance becomes a factor of diminishing importance in the establishment and maintenance of cross border economic, political and socio-cultural relations"2 For this essay globalisation will be the increased mobility of goods, services, labour, technology and capital around the globe through capitalism. ...read more.

Free trade restrains conflict by promoting interdependence i.e. oil and iron are necessary to fight a war, therefore if country A supplies country B with oil and country B supplies country A will iron, it will severely dissuade them from going to war with each other. In addition, with increased international investment we now own more of each other and therefore we are less likely to do damage to it. Due to the greater flow of money through non-governmental organisations there has been an increase world populations living above the poverty line. The increased number of multination corporations such as Starbucks has greatly assisted the flow of money Free economic interchange is also believed to promote democracy; many new democratic elections such as those in Indonesia and Mexico have come about through the countries exposure to free trade and capital movement. "people who operate in open economies eventually demand more open societies"5 The argument against globalisation can start with this quote. Unfortunately, investors have proven themselves willing to support oppressive regimes such as Saudi Arabia and Communist authoritarianism in China, just as long as these regimes open markets to foreign companies. ...read more.

It can be argued further that due to the fact that multinationals can have their countries create laws through the organisations they dominate they can effectively run sweat shops that treat workers no better than slaves. In conclusion we see that in theory globalisation is a force for good and it should bring prosperity to all regions throughout out the world and should succeed in bringing many above the poverty line. However, we see that it does have many major faults, mainly the fact that due to poor voting systems and unfair influence in these organisations, who claim to be promoting free trade, leads to the domination of economically smaller countries. Real power has moved from local to state, from state to national, from national to international, until finally representative democracy means voting for politicians every few years that use that mandate to transfer national powers to the World Trade Organisation and The International Monetary Fund.10 1 http://www.globalisationguide.org/01.html 2 http://www.globalisationguide.org/01.html 3The International Economy: A Global Road Map 4 www.sosig.ac.uk/roads/subject-listing/ UK-cat/capflo.html 5 George W Bush 6 "Fences And Windows" - Naomi Klein 7 "No Logo" - Naomi Klein 8 "Fences And Windows" - Naomi Klein 9 www.oxfam.org.uk/what_you_can_do/campaign/educationnow/downloads/imf_reform_0400.doc (IMF problems website) 10 "Fences And Windows" - Naomi Klein Adam Coppell International Relations 13 Dawson Dean Bowker Adam Coppell Page 1 5/10/2007 ...read more.