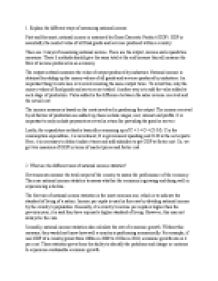 ﻿1. Explain the different ways of measuring national income. First and foremost, national income is measured by Gross Domestic Product (GDP). GDP is essentially the market value of all final goods and services produced within a country. There are 3 ways of measuring national income. There are the output, income and expenditure measures. These 3 methods should give the same total at the end because they all measure the flow of income produced in an economy. The output method measures the value of output produced by industries. National income is obtained by adding up the money values of all goods and services produced by industries. An important thing to note here is to avoid counting the same output twice. To avoid this, only the money values of final goods and services are totaled. Another way is to add the value added at each stage of production. Value added is the difference between the sales revenue received and the actual cost. ...read more.

These statistics gives them the ability to identify the problems and change or continue to experience sustainable economic growth. Besides that, we can find out the distribution of national income of the people. Using the income method, we know how much money they earn and the extent of the disparity in the income distribution between them. Knowing this, governments can attend to this problem by reducing the gap between the rich and the poor. Lastly, national income statistics can allow governments to decide on the pattern of taxation for a country. The difference between less developed and developed countries are less developed countries rely on indirect taxes compared to their counterparts who rely on direct taxes. If the government does not get their pattern of taxation right, this could prove detrimental to their country. 3. Explain the difficulties when measuring national income. While there are many benefits and different uses to measuring national income, the most prominent problem when measuring is the inaccuracy of it. ...read more.

7. Differentiate between the Keynesian and Monetarist approach. The first difference between the two approaches is their priorities. For most Keynesians, the avoidance of unemployment is a key priority while the monetarists see the control of inflation as the top priority for a government. Keynesians favour government intervention to influence the level of economic activity while monetarists believe that the main role of a government is essentially to control the money supply and nothing else. Keynesian argues that when there is a high unemployment, the government should intervene and engage in deficit financing to raise the level of spending. The monetarists do not agree with this statement because they think this will only succeed in raising inflation in the long run. Lastly, Keynesians led by the work of John Maynard Keynes believe that if left to market forces, there is no guarantee that the economy will achieve a full employment level of GDP. Compared to the monetarists approach led by Milton Friedman, they think the economy is stable unless disturbed by erratic changes in the growth of money supply. ...read more.