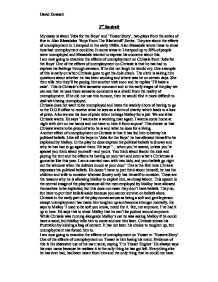 My essay is about 'Jobs for the Boys' and 'Yosser Story', two plays from the series of five in Alan Bleasdales 'Boys From The Blackstuff' Series.

3rd Re-draft My essay is about 'Jobs for the Boys' and 'Yosser Story', two plays from the series of five in Alan Bleasdales 'Boys From The Blackstuff' Series. They are about the effects of unemployment in Liverpool in the early 1980s. Alan Bleasdale wrote these to show how bad unemployment could be. In some areas in Liverpool up to 50% of people were unemployed and Bleasdale wanted to express his concerns about this. I am now going to examine the effects of unemployment on Chrissie from 'Jobs for the Boys' One of the effects of unemployment on Chrissie is that he has had to express his feelings through sarcasm. If he did not laugh he would cry. One example of this is early on when Chrissie goes to get his dole check. The clerk is asking him questions about whether he has been working and where was he on certain days. She then tells him they'll be paying him another visit soon and he replies 'I'll bake a cake'. This is Chrissie's first sarcastic comment and in the early stages of the play we can see that he uses these sarcastic comments as a shield from the reality of unemployment. If he did not use this humour, then he would find it more difficult to deal with being unemployed. Chrissie does not want to be unemployed and hates the weekly chore of having to go to the D.O.E office to receive what he sees as a form of charity which leads to a loss of pride. ...read more.

Another sign of Yosser losing his mind is seen when he attempts to cook a meal for his children in scene twelve. He is seen murdering a pan of fish fingers and he says to the children although he may as well be talking to himself "You wanna a dinner-you can a have dinner. I can cook, course I can, sod the chippy, leave to me" In the next scene we see Yosser walking glumly out of a chip shop holding a bag of large chips meaning he must of failed in his cooking attempt as he always does in life. Also, he always says he can do other peoples jobs. In scene 5 and 6 involving Malloy (that may have been a dream sequence and is not seen in the television production of 'Yosser Story') he uses the line 'I could have done that...' meaning he could of done what Malloy just did, commit suicide, but at the end of the play we see he can't even do that. This shows that he has lost his mind and that now he does not even know what he is saying During the play he has been forced by unemployment to face his failures in life. He does this by using the sandcastle metaphor because like everything ever in his life the sandcastles did not last long. He says to the Wino 'I built sandcastles and...I sometimes think that's all I've ever done. ...read more.

I am now going to examine the T.V production in 'Jobs for the Boys' and 'Yossers Story' and why it was filmed the way it was Both 'Jobs for the Boys' and 'Yossers Story' were filmed as if they were documentaries. Also the sound effects are louder increasing the documentary style. A clear example of this is in the opening scene of 'Job for the Boys'. We hear typewriters, groups of people talking and children crying. This increases the realism helping Alan Bleasdale make his points about unemployment and helping us to realise that it is real. There is not a lot of music is used in 'Jobs for the Boys' and 'Yossers story'. When the music is used it is done so by creating a dramatic tension. An example of this is in 'Jobs for the Boys' when Chrissie, Loggo and Snowy are being followed by Lawton and Moss. The music builds up the tension for what is going to happen later in the play. Music is also used to show what's happening in Yossers head in 'Yossers Story'. Discordant and sad music shows what is happening inside Yossers head, it shows us his confusion, frustration and tells us that he is panicking. This is used in the opening dream sequence as he searches for his children. In conclusion I feel that Alan Bleasdale succeeded in his attempt to show the effects of unemployment and has succeeded in getting his views across. My views on unemployment have changed because now I feel I have seen what it can do to people. David Dowsett ...read more.