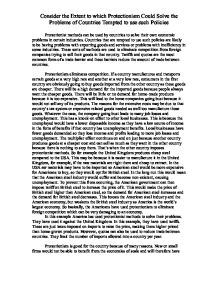 Protectionist methods can be used by countries to solve their own economic problems in certain industries. Countries that are tempted to use such policies are likely to be having problems with exporting goods and services or problems with inefficiency in some industries. These sorts of methods are used to eliminate competition from foreign companies trying to sell their goods in that country. Tariffs and quotas are the most common form of a trade barrier and these barriers reduce the amount of trade between countries. Protectionism eliminates competition. If a country manufactures and transports certain goods at a very high rate and another at a very low rate, consumers in the first country are obviously going to buy goods imported from the other country as these goods are cheaper. There will be a high demand for the imported goods because people always want the cheaper goods. There will be little or no demand for home-made products because it is too expensive. This will lead to the home companies going bust because it would not sell any of its products. The reasons for the extensive costs may be due to that country's tax system or expensive related goods needed as well too manufacture those goods. Whatever the case, the company going bust leads to many job losses and unemployment. This has a knock-on effect to other local businesses. ...read more.

Tariffs are then used to make foreign goods more expensive. Protectionism is also used to prevent unemployment. Unemployment would occur if British firms are kept out of business with cheaper foreign goods. Firms would be unable to make profit and would then reduce staff. Dumping causes British firms to sell less and less of their goods because foreign companies initially sell their goods to the UK for below the production cost. Once there are no British firms left, the foreigners raise their price. Protectionism is also used because most of the other countries use them too. Countries will only get rid of trade barriers if other do to, but there are too many countries to do this but the General Agreement on Tariffs and Trade (GATT) was set-up to make countries agree on protectionism. Over-specialisation is also a problem and if a country relies too much on a certain good or 2, as demands changes all the time, there is a possibility that demand for that good. Protectionism methods allow a country to keep a wider range of industries alive. Questions on International Trade 1. A tariff is a tax on the price of import, but quotas are limit on the amount of imports allowed into a country per year. Tariffs are used to raise the price of foreign goods so more people buy home-made goods. ...read more.

A limit on this would decrease the profits for foreign firms as we would be a major customer. Other countries would not like this as their firms would be put of business and unemployment rising. 5. a) A trade war is when two or more countries engage in a battle over goods and services imported and exported between them. One, such as the US in this example, would impose barriers limiting and reducing the number of imports into their country, so European Community (EC) countries. The other country would retaliate by imposing trade barriers on the other county's goods. b) Countries threaten trade wars because they think in the long-run it would benefit them. A trade war can manipulate another country to your own demands depending on who is the wealthier country economically. c) In a trade war between the USA and the EC, I think the EC would suffer the most. The USA has a larger impact on the world economy and international trade than the EC do. The USA is a very wealthy country so even though it may be illegal, they can manipulate anything, including trade. They can reduce the number of imports into the USA, making the EC suffer because they don't need the EC, but we, as a group of countries, need them because there would not be too many countries in the world then to trade with. ?? ?? ?? ?? Consider the Extent to which Protectionism Could Solve the Problems of Countries Tempted to use such Policies ...read more.