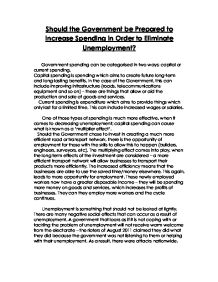 Government spending can be categorised in two ways: capital or current spending.

Capital spending is spending which aims to create future long-term and long-lasting benefits. In the case of the Government, this can include improving infrastructure (roads, telecommunications equipment and so on) – these are things that allow or aid the production and sale of goods and services.

Current spending is expenditure which aims to provide things which only last for a limited time. This can include increased wages or salaries.

One of those types of spending is much more effective, when it comes to decreasing unemployment; capital spending can cause what is known as a ‘multiplier effect’.

Should the Government chose to invest in creating a much more efficient road or transport network, there is the opportunity of employment for those with the skills to allow this to happen (builders, engineers, surveyors, etc). The multiplying effect comes into play, when the long term effects of the investment are considered – a more efficient transport network will allow businesses to transport their products more efficiently. The increased efficiency means that the businesses are able to use the saved time/money elsewhere. This again, leads to more opportunity for employment. These newly employed workers now have a greater disposable income – they will be spending more money on goods and services, which increases the profits of businesses. They can they employ more workers and the cycle continues.

Unemployment is something that should not be looked at lightly. There are many negative social effects that can occur as a result of unemployment. A government that looks as if it is not coping with or tackling the problem of unemployment will not receive warm welcome from the electorate – the rioters of August 2011 claimed they did what they did because the government was not listening to them or helping with their unemployment. As a result, there were attacks nationwide.

As mentioned earlier, employment increases disposable income, and will most likely increase a consumers demand for products. In response to the increased demand, firm owners will possibly require more of their products. This means that the demand for secondary goods will also increase. In this case, aggregate demand increases – this is the general demand of goods and services in an entire economy. As a result, national income (which is output/expenditure/income) shall also increase, leading to economic growth.

Government spending and increased employment can also have negative side-effects.

Most business owners will be looking towards their own self gain. Looking for ways to increase output, whilst reducing costs to a minimum. In a world that is advancing rapidly, in terms of technology, business owners can gain from this; certain jobs will be more efficient, if a machine is carrying it out. As a result, physical manpower can be reduced – this cannot be helped, if a government is investing in the technological capabilities of an economy.

Having a government increase their expenditure can have drastic consequences on an economy. When the government makes in investment, it also makes an injection of money into the economy. Should this injection be too high, inflation can occur – inflation is the rise in the general cost of goods. The rate of inflation must be kept stable, as it could have drastic effects on an economy if household incomes do not rise with it.

If a government chooses to increase their spending to target unemployment, they will possibly have to borrow money to do so. Doing so can possibly incur a budget deficit – this is when a government’s spending is greater than its income. This can lead to severe economic problems if not addressed with strict austerity measures (lower spending/reduced benefits/reduced public services).

A nation’s international reputation is also at stake if its debt is not managed properly. A country can fall into crisis if it cannot repay its debts and borders default.

Countries like Greece and Italy have this problem, as their economy (more specifically government spending and tax collection) has been mismanaged, leading bailouts.

I feel that a government should definitely be prepared to increase its spending to eliminate unemployment. However, this is only in certain cases - if the spending that will increase aims to bring future and long-term prospects (capital) and not short-term (current). If the government has to borrow to increase this spending, I still think the increased spending should take place, but only if the debts are managed sufficiently.

This essay engages with the task well, but there are plenty of places where improvements could be made. This task infers two questions: "Is an increase in government spending effective in reducing unemployment?" and "Is a reduction in unemployment worth ...

This essay engages with the task well, but there are plenty of places where improvements could be made. This task infers two questions: "Is an increase in government spending effective in reducing unemployment?" and "Is a reduction in unemployment worth the increase in spending?". There is some attempt to analyse and answer both of these questions, but it all seems a bit jumbled. Instead of looking at the different types of government spending, there needs to be a discussion of how effective it is, and this would've been easily done with a diagram. From not having a clear argument, it is difficult for the examiner to allocate marks where relevant.

The analysis here is sound. A number of concepts are explored, such as the multiplier effect and tax revenue, but these are not explained or elaborated upon. For example, the multiplier effect is asserted rather than explained, and there is no discussion of why it is relevant. There needs to be a sentence or two explaining how a small increase in government spending will result in a larger increase in aggregate demand, making it an effective way of reducing unemployment. A popular evaluative point with government spending is that it's direct, and doesn't depend upon marginal propensity to save or marginal propensity to import. If this essay had discussed this whilst leading to an argument saying it is effective, it would've gained credit. I really wanted to see some basic diagrams including aggregate demand and supply here. It would be easy to show that a small increase in spending (a component of aggregate demand) won't have much effect on real GDP, and the relationship between real GDP and employment. I like how there is a discussion of borrowing, but there needs to be an exploration of opportunity cost. This is a concept that examiners are always looking to see in answers. A simple discussion shows higher level analysis in this case.

This essay has a jumbled structure. As mentioned above there are two questions where are inferred here. I would be tackling them separately, using plenty of diagrams to analyse whether government spending is effective in reducing unemployment, then looking at the costs of unemployment to build an argument to say why it's necessary to reduce it. As it is jumbled, there is no clear argument. There is no discussion of the extent to which governments should increase spending, which means there is no justified judgement - only a judgement including the first person of "I feel that". I would note that it's wise not to use the first person as it suggests your views are personal and aren't backed up with evidence or analysis. Spelling, punctuation and grammar are fine.