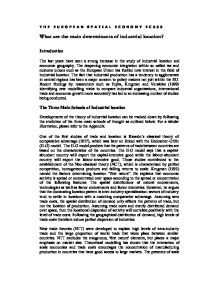 What are the main determinants of industrial location?

T H E E U R O P E A N S P A T I A L E C O N O M Y E C 5 5 5 What are the main determinants of industrial location? Introduction The last years have seen a strong increase in the study of industrial location and economic geography. The deepening economic integration within so called tax and customs unions such as the European Union has fuelled new interest in the field of industrial location. The fact that industrial production has a tendency to agglomerate in central regions has been a major concern to policy makers not just within the EU. Recent findings by researchers such as Fujita, Krugman and Venables (1999) identifying new modelling tricks to compare industrial organizations, international trade and economic growth more accurately has led to an increasing number of studies being conducted. The Three Main Schools of Industrial location Developments of the theory of industrial location can be tracked down by following the evolution of the three main schools of thought as outlined below. For a tabular illustration, please refer to the Appendix. One of the first studies of trade and location is Ricardo's classical theory of comparative advantage (1817), which was later on linked with the Heckscher-Ohlin (H-O) model. The H-O model predicts that the patterns of trade between countries are based on the characteristics of the countries. The H-O model says that a capital-abundant country will export the capital-intensive good while the labour-abundant country will export the labour-intensive good. ...read more.

in turn determines profitability of firms. Depending on the starting point, they either predict convergence or divergence. At high values of T it is most profitable to produce in both locations, leading to divergence. At low levels of T, production will tend to locate in a single location (the core). Bifurcation Core Periphery Model In view of the multiple outcomes which can be accommodated in this theoretical framework, empirical evidence is limited. In these models, agglomeration mechanisms are confronted with increases in the prices of the immobile factors. The outcome may be high agglomeration levels resulting in the centre-periphery structure, which in turn lead to higher economic integration. The new economic geography literature extends this line of research by showing that international or inter-regional demand differences are themselves likely to be endogenous - either because of mobility of workers (Krugman, 1991) or because of mobility of firms which demand intermediate goods (Venables, 1996). In industries, which are linked through an input-output structure, the downstream industry will form the market for upstream firms. The home-market effect1 then means that upstream firms are drawn to locations where there are relatively many. In addition to this demand (or backward) linkage there may also be a cost (or forward) linkage. Having a larger number of up-stream firms in a location benefits downstream firms who obtain their intermediate goods more cheaply - by saving transport costs, and perhaps also benefiting from a larger variety of differentiated inputs or more intense competition in the upstream industry. ...read more.