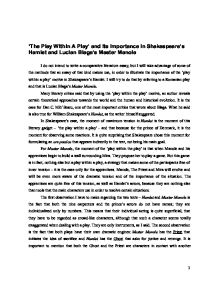 'The Play Within A Play' and Its Importance In Shakespeare's Hamlet and Lucian Blaga's Master Manole I do not intend to write a comparative literature essay, but I will take advantage of some of the methods that an essay of that kind makes use, in order to illustrate the importance of the 'play within a play' motive in Shakespeare's Hamlet. I will try to do that by referring to a Romanian play and that is Lucian Blaga's Master Manole. Many literary critics said that by using the 'play within the play' motive, an author reveals certain theoretical approaches towards the world and the human and historical evolution. It is the case for Dan C. Mih`ilescu, one of the most important critics that wrote about Blaga. What he said is also true for William Shakespeare's Hamlet, as the writer himself suggested. In Shakespeare's case, the moment of maximum tension in Hamlet is the moment of this literary gadget - 'the play within a play' - and that because for the prince of Denmark, it is the moment for observing some reactions. It is quite surprising that Shakespeare chose this moment for formulating an ars poetica that appears indirectly in the text, not being his main goal. ...read more.

Yet the play also questions Hamlet himself, and so the speech of the player king should to some extent 'catch the conscience of the' prince. A fool is clearly absent from Hamlet and so this alternative questioning of our key protagonist could in some way be viewed as fulfilling, an abstract fool role. Yet Hamlet is too caught up in the purpose, he needs 'passion,' like that of the players in order to revenge. The players and their play underline the analysis of theatre and its power in Hamlet, and they function in order to make objective comparisons to the 'real' characters in the play as well as provoke their actions and thoughts in their reflections of what is past and what is to come in the murders of the old King Hamlet and the inevitable murder of Claudius. It is obvious that the most intense level of dramatic tension is accentuated by a character that has contact with the world of the spirits and is accomplished through the 'play within a play' "gadget". The first conclusion is that this literary device resolves a conflict and has a great theatric impact on the stage. ...read more.

It is important to mention that women are out of this scheme: Ophelia is only present at the scene when the play within a play occurs and Mira has a passive participation, by accepting the role Manole suggested. These two women must not be regarded from the perspective of this literary device. Mira and Ophelia are reasons and means for finding out the truth and their deaths fit the category of mystic deaths. According to Leon Levi]chi, Ophelia's tragedy appeared because Hamlet did not try to touch her virginity. This is, in fact, part of his tragedy, too. The secondary plot of the play - Ophelia's love - is one of the bitterest details in all Shakespearean tragedy. Hamlet cannot resist her temptation, as we can determine from how he acts during the actors' play. His obscene jokes transform Ophelia in the target of all his disgust relating to the whole s****l behavior of men. The last word he addresses to her is a joke about how women "mis-take" their husbands. I conclude with the idea that the play within a play in Hamlet concentrates its dramatic energy on the idea of performing and every character has a complex role. There are more levels of relationships in the play's plot and the characters take them into consideration according to their interests precisely by making use of the play within a play opportunity. 1 ...read more.