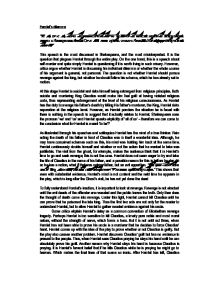 Hamlet's dilemma "To be, or to be, that is the question/Whether' tis nobler in the mind to suffer/the slings and arrows of outrageous fortune/Or to take arms against a sea of troubles/And by opposing end them all." This speech is the most discussed in Shakespeare, and the most misinterpreted. It is the question that plagues Hamlet through the entire play. On the one hand, this is a speech about self-murder and quite simply Hamlet is questioning if it is worth living in such misery. However, critics argue whether Hamlet is discussing his individual dilemma or whether the whole course of his argument is general, not personal. The question is not whether Hamlet should pursue revenge against the king, but whether he should follow his scheme, which he has already set in motion. At this stage Hamlet is suicidal and risks himself being estranged from religious principles. Both suicide and murdering King Claudius would make him feel guilt at having violated religious coda, thus representing estrangement at the level of his religious consciousness. As Hamlet has the duty to avenge his father's death by killing His father's murderer, the King, Hamlet risks separation at the religious level. ...read more.

What would the people think of their prince if he were to murder the king? What kind of effect would it have on his beloved mother? Hamlet considers questions of this type, which in effect hasten his decision. After all, once his mother is dead and her feelings out of the picture, Hamlet is quick and aggressive in forcing poison into Claudius's mouth. Some critics believe that Hamlet simply thinks too much. He wants the murder of the King to be perfect. Claudius has to go to hell. The people have to know about the murderer Claudius. Hamlet spends too much time planning and not enough time doing; thus, making the King's murder more complicated than other murders he has orchestrated. Also, he has to be careful around Claudius after the play because it revealed his sanity to the King as it revealed the guilt of Claudius to Hamlet. After the play within a play, Hamlet has proof and still cannot act. Not until everybody is dying, including himself, does he realize that he should not have waited so long. He understands the consequences of his delay all of his pent-up rage explodes, and he murders the King; getting the revenge he was after from the beginning. ...read more.

Hamlet establishes a need for revenge when he encounters a ghost in the appearance of his father. His "supposed" father is in purgatory. His father requests that Hamlet should take the life of the person who murdered him, or else he will forever remain in purgatory. During the players play, however, Hamlet establishes that Claudius was guilty of his father's murder. Hamlet needs to look at how he is to take revenge upon Claudius, ensuring he does not "o'erflow the measure" and upset his mother. Hamlet's sentiments are no more than expected of a revenger, in literature, if not life, and they are consistent in other plays, but although Hamlet's sentiments are those proper to a revenger and must be accepted at face value. The dilemma ultimately arises as, the revenger with his passion at its climax following proof of his enemies' guilt, is presented with his victim, defenceless and alone; and yet it is revenge itself that provides an incontestable reason why this seemingly perfect opportunity is one impossible to take; Hamlet does not want to go to hell. The revenger's horrifying sentiments contribute to the overall presentation of the play as a whole and by the end of the play, Hamlet's dilemma, if anything has been made worse and nothing more than a frenzied killing ends his downfall. ...read more.