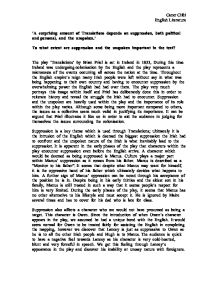 'A surprising amount of Translations depends on suppression, both political and personal, and the unspoken.' To what extent are suppression and the unspoken important in the text? The play 'Translations' by Brian Friel is set in Ireland in 1833, During this time Ireland was undergoing colonisation by the English and the play represents a microcosm of the events occurring all across the nation at the time. Throughout the English empire's reign many Irish people were left without say in what was being happening to their own country and having to encounter suppression by the overwhelming power the English had had over them. The play very much portrays this image within itself and Friel has deliberately done this in order to reiterate history and reveal the struggle the Irish had to encounter. Suppression and the unspoken are heavily used within the play and the importance of its role within the play varies. Although some being more important compared to others, the issues as a collective seem much valid in justifying its importance. ...read more.

It would seem normal for Owen to be treated fairly for assisting the English in completing the mapping, however we discover that Lancey is just as suppressive to Owen as he is to all the other Irish people and Hugh is to Manus. The audience is quick to have a negative feel towards Lancey as his character is very cold-hearted, blunt and very forceful in speech. We get this feeling through Lancey's appearance in the play and discover his inability or uneasy nature with foreigners. When he is offered drink by Hugh his brisk reply lacks diplomacy, as does his remark: "I'll say what I have to say, if I may, and as briefly as possible. Do they speak any English Roland?" Lancey's quote here reveals his intimidating personality and he seems to look down on the Irish. His complete ignorance of calling Owen, Roland can be seen as a technique deployed by Friel to highlight the lack of importance the English had on the cultural and historical aspects of the naming. ...read more.

This is because although the play is written by an Irish author and set in Ireland, it is written in English. Thus the title foreshadows the outcome of the play, however, despite all the attributes Manus and Owen possess, they are still forced to remain unspoken and accept authority. Owen does eventually realize what he has gotten himself into, however, once again it is too late to alter anything back to its original state. In conclusion, it is apparent that the theme of suppression and remaining unspoken runs through the length of the play. This technique reveals the difficulties and boundaries which existed between the Irish and the English. The choice of using such theme could also be noted as being a deliberate act by Friel in order to create further suspense within the play. As the play is written about a historical event which had already taken place, the audience would be aware of the outcome. This then makes the audience character bond far closer as the audience would prefer a less demanding approach of control from the English and a greater sense of support from the Irish in maintaining and pursuing their culture. Caner Cifci English Literature ...read more.