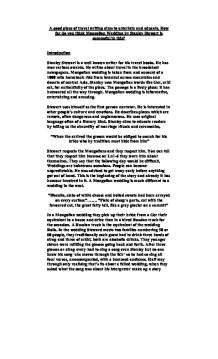 A good piece of travel writing aims to entertain and educate. How far do you think Mongolian Wedding by StanleyStewart is successful in this?

A good piece of travel writing aims to entertain and educate. How far do you think Mongolian Wedding by Stanley Stewart is successful in this? Introduction Stanley Stewart is a well known writer for his travel books. He has won various awards. He writes about travel in the broadsheet newspapers. Mongolian wedding is taken from and account of a 1000 mile horseback ride from Istanbul across mountains and deserts of central Asia. Stanley uses Mongolian words like Ger, arki ect, for authenticity of the piece. The passage is a lively piece; it has humoured all the way through. Mongolian wedding is informative, entertaining and amusing. Stewart uses himself as the first person narrator. He is interested in other people's culture and emotions. He describes places which are remote, often dangerous and unglamorous. He uses original language often of a literary kind. Stanley aims to educate readers by telling us the absurdity of marriage rituals and ceremonies, "When the arrived the groom would be obliged to search for his bride who by tradition must hide from him" Stewart respects the Mongolians and they respect him. You can tell that they respect him because on Ln1-6 they warn him about themselves. ...read more.

Half way through only realising that's its about a failed wedding, when they asked what the song was about his interpreter make up a story about a horse and his owner. That adds to the humour of the story. Every one has their own special something about them and Stewart brings that out in them and describes them in a way that people in the west understand, "The groom's brother, in his role as best man, was trying to bring some order to the proceedings"..... "He wore the kind of peaked leather cap favoured by Lenin" The brother was exactly like Lenin in the revolution days; he had the goatee and had a tendency to stand wave his arms in a declamatory fashion. He commanded people like Lenin did. This is a good way to compare the family. Also there were two brothers one of them who look like Wyatt Earp the legendary sheriff from the American Wild West era. Large numbers of peoples left together will lead to trouble with the help of airag, and that's what exactly happened. ...read more.

He is sparing the adjectives but the ones that are used are very effective. The sentence structure is varied thought the piece 'It cleared the air nicely'. The story has great bits of humour, "One of the grooms brother had taken proprietorial interest in me"...."When I emerged that I was travelling by horse, he offered me his own horse, a priceless beast according to his own calculations. I demurred but he insisted. "I'll kill a sheep tomorrow, you can take it with you,' He held up his fingers quizzically, 'Have you a wife' he asked. ' Don't worry. We'll sort something out in the morning.' This shows that he is welcomed as one of them and that the man has so much wealth that he wants everyone to know about it. By the end of the story he is accepted as one of them and he respects them for their traditions and gets along with them and they accept him for who he is and they like that. It is said to be lucky for a visitor to come to the wedding and I think that it was lucky that he was there if he was not we would not have known about the Mongolian wedding. By Eloise Griffith March 2003 ...read more.