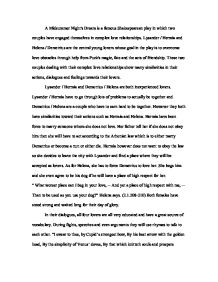 A Midsummer Night's Dream is a famous Shakespearean play in which two couples have engaged themselves in complex love relationships.

A Midsummer Night's Dream is a famous Shakespearean play in which two couples have engaged themselves in complex love relationships. Lysander / Hermia and Helena / Demetrius are the central young lovers whose goal in the play is to overcome love obstacles through help from Puck's magic, fate and the acts of friendship. These two couples dealing with their complex love relationships show many similarities in their actions, dialogues and feelings towards their lovers. Lysander / Hermia and Demetrius / Helena are both inexperienced lovers. Lysander / Hermia have to go through lots of problems to actually be together and Demetrius / Helena are a couple who have to earn hard to be together. However they both have similarities toward their actions such as Hermia and Helena. Hermia have been force to marry someone whom she does not love. ...read more.

Helena says. (2.1.208-210) Both females have stood strong and waited long for their day of glory. In their dialogues, all four lovers are all very educated and have a great source of vocabulary. During fights, speeches and even arguments they will use rhymes to talk to each other. "I swear to thee, by Cupid's strongest bow, By his best arrow with the golden head, By the simplicity of Venus' doves, By that which knitteth souls and prospers loves...," Hermia says. (1.1. 169-178) "Demetrius loves your fair: O Happy fair! Your eyes are lode-stars;" Helena says. (1.1. 182-192) "Helen, to you our minds we will unfold: To-morrow night, when Phoebe doth behold..." Lysander says. (1.1. 208-213) "There is no following her in this fierce vien: Here therefore for a while I will remain," says Demetrius. ...read more.

Hermia is jealous of Helena when Lysander and Demetrius are both under the love juice spell, which caused them to love Helena instead of her. All lovers feel angry at each other over love and friendship. Hermia gets angry with Helena because she thinks Helena stole Lysander from her. Helena gets mad at Hermia because of her complaining and her being selfish. Lysander and Demetrius are both confident and angry at each other because they are both fighting over for Helena and Hermia. Based on the complex relationships in A Midsummer Night's Dream, all the lovers have overcome problems, which cause them to fight and argue at each other. It all ends when Puck realizes he is wrong and changes things back to normal. In the end, all the couples are back together with their love ones, while all the confusion is gone. ...read more.