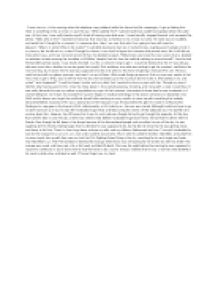 A Story from Gaza, Palestine

﻿It was two a.m. in the morning when the telephone rang suddenly while the silence had the sovereignty. I got up feeling that there is something in the air since it is just the war. "Who could be this?" I asked myself, but couldn't extrapolate whom the caller was. At that time, I was really beside myself, afraid of hearing some bad news. I stood steadily, stepped forward, and answered the phone. "Hello, who is this?" I wanted to know, but that voice was so familiar to me. It was my uncle. His voice was so inaudible, and weird that I thought for a moment it is someone else. Now, I am sure that what I am going to hear will never be pleasant. "What is it uncle? What is the matter?" I said while tearing my hair out. I started to be a nag because I had got a knot in my tummy, but he did not say a word. ...read more.

What made things go worse is that my mom was awake at that time. Now, I got to find a way to tell her that the boy she had loved up to the maximum did not make it. She looked at me, and asked " what happened?" I could not keep it inside, and stay silent that I wanted to share my pain with her. Through my tears I told her what had ocuured to him. Once she knew about it, she started quivering, shivering, and crying with a voice I could hear. It was really distressful to see my mother crying before my eyes. At that moment, she wanted to know how he was murdered, so I started telling her. As known, he received his master's degree in medical technology in the Islamic University on December 2nd, 2008 and his dream was to get the certificate himself after working so many months to come up with something that nobody discovered before. ...read more.

"Now it is time to go home and see my wife, and my children, Mohammed and Lian,." he said. He decided to wait by the mosque for a taxi at 1 a.m., but rarely could he see anyone. That is why he called his brother, Abd Allah, and asked him to come to pick him up with their own car, but the F-16 Fighting Falcon flying in the sky, searching for its next target was faster than Abd Allah's car. The F-16 bombed it. Bombed the mosque which Ramy was still waiting for his brother by with two shells! The mosque was razed, and Ramy got a hit at his head, and bled till death. That was the night before the morning he was supposed to receive his certificate in, but it seems like he had the honor to be a martyr instead. I believe that he was a real hero who benefited his country while alive, and dead as well. I'll never forget you, my hero! ...read more.