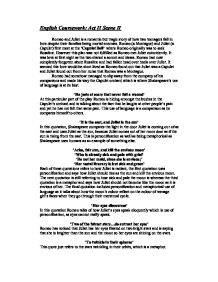 English Coursework: Act II Scene II Romeo and Juliet is a romantic but tragic story of how two teenagers fall in love despite their families being mortal enemies. Romeo (a Montague) and Juliet (a Capulet) first meet at the 'Capulet Ball' where Romeo originally was to seek Rosaline. However this plan was not fulfilled as Romeo met Juliet coincidently. It was love at first sight as the two shared a sonnet and kisses. Romeo had now completely forgotten about Rosaline and had fallen head over heels over Juliet. It seemed this love would be short lived as Romeo found out that Juliet was a Capulet and Juliet found out from her nurse that Romeo was a Montague. Romeo had somehow managed to slip away from the company of his companions and made his way the Capulet orchard which is where Shakespeare's use of language is at its best. 'He jests at scars that never felt a wound' At this particular part of the play Romeo is hiding amongst the bushes in the Capulet's orchard and is talking about the fact that he laughs at other people's pain and yet he has not felt that same pain. This use of language is a comparison as he compares himself to others. 'It is the east, and Juliet is the sun' In this quotation, Shakespeare compares the light in the door Juliet is coming out of as the east and uses Juliet as the sun, because Juliet comes out of her room door as if the sun is rising from the east. ...read more.

Romeo here is still commenting on how radiant Juliet looks. 'That birds sing and think it were not night' Romeo continues complimenting Juliet on how radiant she is looking by using the image of birds singing as if it were not night. Here Shakespeare's language is metaphorical. 'O speak again bright angel...' ('As glorious to this night, being o'er my head 'As is a winged messenger of heaven') Both of these quotations refer to Juliet as a winged messenger from heaven. The first quotation is a metaphor and says that Juliet is so radiant that she is a angel however Shakespeare juxtapositioned her so she was deliberately above Romeo and therefore making her look like an angel. The second quotation is a simile as Romeo says Juliet is LIKE a winged messenger of heaven, an angel. 'When he bestrides the lazy puffing cloud' 'And sail upon the bosom of the air' Romeo at this part of the play is still watching Juliet from the orchard and has started to talk Juliet flying as an angel. Here Shakespeare here uses a metaphor to describe Juliet's radiance. 'Tis but thy name that is my enemy' 'What's Montague? It is nor hand not foot, nor arm nor face' 'What's in a name? That which we call rose by any other name would smell as sweet;' Juliet has now began to speak and is speaking of Romeo and how why her first love had ...read more.

'With love's light wings did o'er per'ch these walls' Metaphorical use of language is used here as Juliet is worried some of her kinsmen will find Romeo, however Romeo says that he flew over the wall with love's light wings because a stone wall could not keep him from seeing Juliet. 'Alack, there lies more peril in thine eye than twenty of there swords' 'And I am proof against their enmity' Even though Juliet is worried about whether her kinsmen or cousins or family will find Romeo says that he finds her more enchanting then dangerous in the first quotation. In the second quotation Romeo uses himself as an example of Juliet's cousin's hostility. Shakespeare's use of language is metaphorical in these two quotations. 'I have night's cloak to hide me from their eyes' Romeo reassures Juliet that she has nothing to be worried about and that he will be able to escape from the orchard unnoticed because he will hide under his cloak. Shakespeare's imagery is metaphorical as it is literally night's cloak. 'My life were better ended by their hate, Than death prorogued, wanting of the love' Romeo, in a way hassles Juliet for commitment asking for her hand in marriage. His language now becomes intimate when he tells Juliet that he would rather die with Juliet than stay alive without her. ...read more.