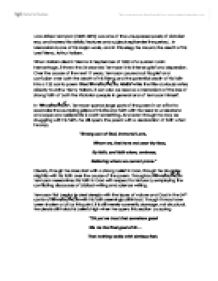 Alfred Lord Tennysons In Memoriam contains many theological elements debating the confusion between science and religion. The striking theology in the poem makes it different from the other contemporary Victorian poems.

Lord Alfred Tennyson (1809-1892) was one of the unsurpassed poets of victorian era, and indeed his stylistic features and subjects epitomise the period. . In Memoriam is one of his major works, and in this elegy he mourns the death of his best friend, Arthur Hallam. When Hallam died in Vienna in September of 1833 of a sudden brain hemorrhage, it threw the 24-year-old Tennyson into intense grief and depression. Over the course of the next 17 years, Tennyson poured out his grief and confusion over both the death of his friend and the potential death of his faith into a 133 canto poem titled In Memoriam, A.H.H. while the title obviously refers directly to Arthur Henry Hallam, it can also be read as a memoriam of the loss of strong faith of both the Victorian people in general and of Tennyson himself. In "In Memoriam", Tennyson spends large parts of the poem in an effort to reconcile the crumbling pillars of his life and faith with his need to understand and cope and believe life is worth something. And even though he may be struggling with his faith, he still opens the poem with a declaration of faith when he says, "Strong son of God, immortal Love, Whom we, that have not seen thy face, By faith, and faith alone, embrace, Believing where we cannot prove." ...read more.

Tennyson also makes specific effort here to capitalize the word "Nature," as he does on the multiple occasions where he personifies it. Generally only names are capitalized within a sentence. In this case, Tennyson makes sure to capitalize both "God" and "Nature," putting them on an equal footing. Since normally only "God" would be capitalized here, this shows how Tennyson has raised up Nature to the level of a deity. Though this is may seem an irrelevant detail, perhaps he is suggesting here that God and Nature are not at strife, but are, in fact, one and the same. This seems to be another tentative insertion of a tendril of his remaining faith. It appears this is not so, though, when looking at the next two lines of the stanza where he states of nature: "So careful of the type she seems, so careless of the single life." This is almost a direct contradiction of Matthew 10: 29-30, which says that "Are not two sparrows sold for a farthing? And one of them shall not fall on the ground without your Father. But the very hairs of your head are all numbered." If the Bible is correct, then God sees even the tiniest things, and cares for everything, down to the hairs on our heads. ...read more.

In later sections of the poem, the poet comes to a sense of peace within his heart and mind. However, in sections 54, 55, and 56, the author is in the grip of a soul-deep dilemma. His faith steadily degrades from a blind, forced belief to utter hopelessness after careful consideration of evidence he cannot deny. He is wounded by God's apparent betrayal of humanity and desperate for an answer, but there is none forthcoming. It took years for the wounds inflicted by science on the faithful to heal. Some Victorians chose agnosticism as their new philosophy of God; if someone could prove to them His Existence, then they would believe. Others chose to become atheists. Atheism stated that there was no God, no afterlife, and no divine creator. While neither of these theologies was very popular during the Victorian period, they have continued to exist. The citizens like Tennyson who attempted to reconcile their old faith with their new knowledge had to find ways to blend the two together, to show that it was possible for God to work through Nature to achieve His ends. They had to gather together the dust of Earth, and with it shape a Heaven. Alfred Lord Tennyson's 'In Memoriam' contains many theological elements debating the confusion between science and religion. The striking theology in the poem makes it different from the other contemporary Victorian poems. ...read more.