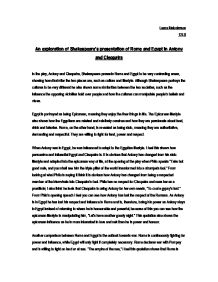 Laura Malcolmson 12LS An exploration of Shakespeare's presentation of Rome and Egypt in Antony and Cleopatra In the play, Antony and Cleopatra, Shakespeare presents Rome and Egypt to be very contrasting areas, showing how dissimilar the two places are, such as culture and lifestyle. Although Shakespeare portrays the cultures to be very different he also shows some similarities between the two societies, such as the influence the opposing vicinities hold over people and how the cultures can manipulate people's beliefs and views. Egypt is portrayed as being Epicurean, meaning they enjoy the finer things in life. The Epicurean lifestyle also shows how the Egyptians are relaxed and relatively carefree and how they are passionate about food, drink and luxuries. Rome, on the other hand, is revealed as being stoic, meaning they are authoritative, demanding and respectful. They are willing to fight for land, power and respect. When Antony was in Egypt, he was influenced to adapt to the Egyptian lifestyle. I feel this shows how persuasive and influential Egypt and Cleopatra is. It is obvious that Antony has changed from his stoic lifestyle and adapted into the epicurean way of life, at the opening of the play when Philo speaks "Take but good note, and you shall see him the triple pillar of the world transformed into a strumpets fool." ...read more.

However the language is not always like this. In later scenes we see a more aggressive side to Cleopatra. In this scene Caesar and Lepidus are talking to one another about Antony's actions in Egypt. As Rome a city whose structure is duty, a city based on authority, they frown seriously on someone as powerful as Antony neglecting his duties. Lepidus and Caesar feel betrayed as they feel Antony is disgracing their values. From this conversation I started to notice the conflict between Rome and Egypt, although this conflict seems to be one sided because Shakespeare doesn't seem to show that Egypt has any abhorrence towards Rome. However, Shakespeare shows that Rome and Egypt have conflicting views, "Antony, leave thy lascivious wassails," showing how Caesar views Egypt as being quite feeble and less important than Rome. Like Rome and Egypt, Antony and Cleopatra are presented in contrasting ways. Antony and Cleopatra are entwined in each others lives throughout the duration of the play, until their deaths at the end, but their different lifestyles, stoic and epicurean, resulted in jealousy. In the first scene Cleopatra is jealous of Antony's wife Fulvia and she mocks and taunts Antony "if the scare-bearded Caesar have not sent his powerful mandate to you." ...read more.

In Act Two Scene Five, there is a dramatic change of atmosphere. The scene is set in Egypt, and Shakespeare uses language to portray a sense of melodramatic depression, love and a contrasting atmosphere to the one used in Rome. "Give me some music; music, moody food...of us that trade in love." The sentences are longer, which emphasises Cleopatra's melodramatic behaviour. Food and music also symbolise Egypt's relaxed attitudes. Using food and music within the quotation, shows what Cleopatra needs to become happy. The sentences spoken within Egypt are usually related to food, drink or music and usually have some correlation to Cleopatra's volatile emotions. Although Rome and Egypt have some similarities they are portrayed as being two contrasting areas. Rome is portrayed as being stoic and creates the image of brutality, order, power and authority, while Egypt, on the other hand, is shown as being epicurean and creates the image of volatility, love, emotion and melodrama. The areas are portrayed as being so different because of the different types of leadership. As Egypt is powered by a woman, Egyptian culture is based on happiness and emotion. In comparison Rome is powered by three men and the Roman culture is based on power and authority. However the contrasting cultures, of Rome and Egypt, are what brought Antony and Cleopatra together, and kept them together until death. ...read more.