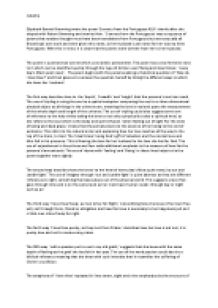 Analysis of Elizabeth Barrett Browning's &quot;How do I love thee?&quot;

﻿natasha Elizabeth Barrett Browning wrote the poem ?Sonnets from the Portuguese XLIII? shortly after she eloped with Robert Browning and married him. ? Sonnets from the Portuguese? was a sequence of poems that readers thought must have been translations from Portuguese but were actually all Brownings? own work and were given this name, as her husband?s pet name for her was my little Portuguese. With this in mind, it is clear that the poems were written from her to her husband. The poem is a petrarchan sonnet which uses iambic pentameter. The poem has a very feminine tone to it which can be identified quickly through the type of diction used ?Being and ideal Grace?, ?every day?s Most quiet need,?. The poem begins with the persona asking a rhetorical question of ?How do I love thee?? and then goes on to answer the question herself by listing the different ways in which she loves her husband. The first way describes love to the ?depth?, ?breadth? and ?height? that the persona?s soul can reach. The use of tripling is using the soul as a spatial metaphor comparing the soul to a three dimensional physical object as all things in the universe are, meaning the love is real and spans the measurement of the whole depth and length of the universe. ...read more.

The forth way ?I love thee purely, as they turn from Praise.? describes how her love is not l**t, it is purely love and not to receive any praise. The fifth way ?with a passion put to use In my old griefs,? suggests that she loves with the same depth of feeling as the grief she has felt in her past. The use of the word passion could also be a biblical reference meaning that she loves with such intensity that it resembles the suffering of Christ?s crucifixion. The anaphora of ?I love thee? repeated in lines seven, eight and nine emphasizes by the structure of them that the poem is a list of loving. The sixth way ?with my childhood?s faith.? Describes how she loves with trust and innocence and with the sort of blind and unquestionable faith that existed inside of her when she was a child. There is a subtle chiasmus of sounds f and s on line ten which forces the reader to enunciate and stress this line so it is likely to be very important for Browning. The seventh way ?with a love I seemed to lose With my lost saints.? Is describing how she thought she had lost this feeling of pure strong love with her lost loved ones who are now in heaven but now she loves him in that same way. ...read more.

The sibilance throughout the poem makes it seem very soft and soothing and accentuates the feminine qualities of the poem. The Octave in the poem is very positive and draws analogies between the love of the persona and religious and political ideals where as the sestet starts to mention negative experiences and appears to draw analogies between the intensity of Browning?s own feelings when writing the poem and the intensity of love that she felt earlier in her life with the loss of her mother and brothers and likely the recent loss of her father and brothers due to her new love with her husband Robert. On further reading of the poem the reader gets the impression that not only is this a list of the different ways in which she loves but also a vow to her husband. The last line ?I shall but love thee better after death? gives the feeling that she is making a promise to her husband to love him forever. This is likely to have been because Browning had been ill for most of her life and had thought about death so wanted her husband to know that if she were to be gone, her love for him would carry on. (1,250 words) ...read more.