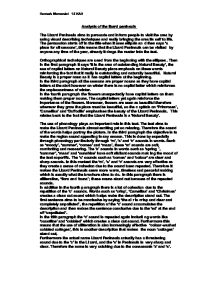 Analysis of the lizard peninsula

Analysis of the lizard peninsula The Lizard Peninsula aims to persuade and inform people to visit the area by using visual describing techniques and really bringing the area its self to life. The persuasion starts off in the title when it uses ellipsis and then says 'a place for all seasons', this means that the Lizard Peninsula can be visited by anyone any time of the year, already it drags the reader into the text. Orthographical techniques are used from the beginning with the ellipses. Then in the first paragraph it says 'It is the area of outstanding Natural Beauty', the use of capital letters on Natural Beauty place emphasis on these words reinforcing the fact that it really is outstanding and naturally beautiful. Natural Beauty is a proper noun as it has capital letters at the beginning. In the third paragraph all the seasons are proper nouns as they have capital letters at the start however on winter there is no capital letter which reinforces the unpleasantness of winter. In the fourth paragraph the flowers unexpectedly have capital letters on them making them proper nouns. The capital letters yet again reinforce the importance of the flowers. Moreover, flowers are seen as beautiful therefore wherever they grow the place must be beautiful, so the capitals on 'Primroses', 'Camellias' and 'Daffodils' emphasises the beauty of the Lizard Peninsula. ...read more.

stand out, Furthermore the actual name Lizard Peninsula actually has a threatening sound due to the 'z' in the Lizard, and the 's' in Peninsula is very sharp and clear. Therefore the name is very catching due to the consonants 'z' and 's'. Repetition plays a key role in a text; particular words may be repeated in different text. In this case repetition is used to ensure that the reader understands that the Lizard Peninsula really is outstanding. As well as the sounds of many letters have been repeated, words have also been repeated to make the sentence stand out and make sure it echoes's to the reader throughout the text. In the third paragraph 'and' is repeated three times, 'the air is crisp and clear completely unpolluted and The Lizard', the repetition of 'and' accumulates the sentence and reinforces the description. Furthermore there is alliteration in the sentence, 'crisp and clear and completely', the adjectives are more emphasised and really make the reader think that the air is free from any sort of pollution. During this paragraph 'where' is also repeated three times in the same sentence; 'it is a place where Primroses flower in December, where Camellias open in time for Christmas and where Daffodils decorate'. ...read more.

The other words that describe the Lizard in the first paragraph are 'sedate and unhurried'; these basically tell the reader that the place is timeless and peaceful so you can escape to it. The overall mood of the text is formal; however in the second paragraph that text directs the reader in the subordinate clause 'that you just don't find anywhere else.' Furthermore the second paragraph enforces that the Lizard Peninsula is 'stunningly beautiful at any time'. This paragraph also uses the personal pronoun 'you', this brings the reader in and adds a colloquial tone. In the third paragraph the words that are chosen are very vivid such as 'flora and fauna', these words make the reader imagine the area although the reader has not been. Additionally winter has been personified to been 'moody' and 'alive', although been 'moody' is a disadvantage due to winter the writer has personified the Lizard Peninsula and is trying to say that even though it is 'moody' or miserable in winter 'in Spring it comes alive', basically that there is plenty to do in the spring. Overall the text uses Proper nouns to place emphasis on a place or object such as the flowers, although they do not need capital letters in this text the flowers such as 'Daffodils' have a capital letter at the beginning to place emphasis on the flower. Hannah Momoniat 12 KAH ...read more.