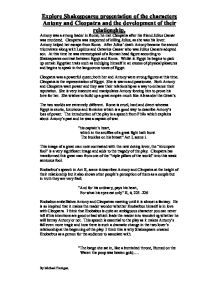 Antony was a strong leader in Rome; he met Cleopatra after his friend Julius Caesar was murdered.

Antony was a strong leader in Rome; he met Cleopatra after his friend Julius Caesar was murdered. Cleopatra was suspected of killing Julius, as she was his lover. Antony helped her escape from Rome. After Julius' death Antony became the second triumvirate along with Lepidus and Octavius Caesar who was Julius Caesers adopted son. At this time he was stereotypical of a Roman head figure according to Shakespeares contrast between Egypt and Rome. Whilst in Egypt he begins to pick up certain Egyptian traits such as indulging himself in an excess of physical pleasures and begins to speak in the languorous tones of Egypt. Cleopatra was a powerful queen; both her and Antony were strong figures at this time. Cleopatra is the representation of Egypt. She is warm and passionate. Both Antony and Cleopatra want power and they saw their relationship as a way to enhance their reputation. She is very insecure and manipulates Antony forcing him to prove his love for her. She wishes to build up a great empire much like Alexander the Great's. The two worlds are extremely different. Rome is cruel, hard and direct whereas Egypt is exotic, luxurious and feminine which is a good way to describe Antony's loss of power. The introduction of the play is a speech from Philo which explains about Antony's past and he was a captain of war. "his captain's heart, which in the scuffles of a great fight hath burst The buckles on his breast" Act I, scene i. ...read more.

"but my full heart remains in use with you" I, iii, 43-44 Also when Fulvia dies Antony must be very cautious because if he cries then Cleopatra will think that he loved her more than her but if he is happy then she will think that he would do the same if she were to die now. Antony can't win. Often when Antony and Cleopatra are together they enter their own world where nothing exists and messengers enter frequently. I believe this are a reminder if reality and that Antony still has ties with Rome and he must decide whether or not he wants to break free from Rome or Cleopatra's hold. "I must from this enchanting queen break off" I, ii, 125 The death of Fulvia means Antony can no longer neglect his duties or the people of Rome will label him a traitor and will lose his power. The death of Fulvia doesn't upset Antony but he feel like a weight has been lifted from his shoulders "give the gods a thankful sacrifice" essentially this means that he believes Fulvias death was a good thing. However now Shakespeare creates a new stage in Antony and Cleopatras relationship. This event causes Antony to return to Rome to fix his affairs and whilst he is there he leaves insecure Cleopatra to embellish and exaggerate their relationship. This also creates doubts in Cleopatras mind "in praising Antony, I've dispraised Caesar" which means she is considering leaving Antony to escape a tragic end. ...read more.

Cleoptra holds back half of her wealth when Caesar asks for it. We are unsure about her intentions when she did this because it as two outcomes, either she did it to stop Caesar thinking she was going to commit suicide so she could kill herself or that she was planning on running away and building a new empire. Cleo then finally before her death honours Antony'' memory and it makes the audience believe she really did love Antony, which is the final show of tragedy in the play. In conclusion I believe Antony and Cleopatra truly did love each other in some way even if it was only a memory. However Antony does say they will enter heaven as "lovers". This play is fraught with tragedy built up slowly through the play. It truly is a pitiful end for the two lovers. I think Shakespeare has used imagery well to show the love of the two and it helps build up their tragic end. The tragic end comes from the conflict between Rome and Egypt and is illustrated by three images, the sword, armour and dimensions. His lowness or highness shows Antony's tragic end, Antony's own sword is ineffective when he tries to kill himself. The final speech is by Caesar in his monotone, simplistic language however he does seem to be inspired and shows how great Antony and Cleopatra were! "Strike those that make them and their story is No less in pity than in glory which Brought them to he lamented." V, ii, 356-61 Explore Shakespeares presentation of the characters Antony and Cleopatra and the development of their relationship. By Michael Finnigan. ...read more.