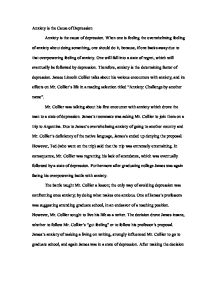 anxiety is the cause of depresion

Anxiety is the Cause of Depression Anxiety is the cause of depression. When one is feeling the overwhelming feeling of anxiety about doing something, one should do it, because, if one backs away due to that overpowering feeling of anxiety. One will fall into a state of regret, which will eventually be followed by depression. Therefore, anxiety is the determining factor of depression. James Lincoln Collier talks about his various encounters with anxiety, and its effects on Mr. Collier's life in a reading selection titled "Anxiety: Challenge by another name". Mr. Collier was talking about his first encounter with anxiety which drove the man to a state of depression. ...read more.

Collier a lesson; the only way of avoiding depression was confronting ones anxiety; by doing what makes one anxious. One of James's professors was suggesting attending graduate school, in an endeavor of a teaching position. However, Mr. Collier sought to live his life as a writer. The decision drove James insane, whether to follow Mr. Collier's "gut feeling" or to follow his professor's proposal. James's anxiety of making a living on writing, strongly influenced Mr. Collier to go to graduate school, and again James was in a state of depression. After making the decision due to anxiety Mr. Collier came to an understanding that the only way one can eliminate depression, is by confronting ones anxiety; by executing what makes one anxious. ...read more.

Furthermore, Mr. Collier didn't know the geographical features of the destination. Also James's foreign language skills were very narrow; consisting of college French. However, eventually Mr. Collier came to a realization that instead of denying the assignment and then regretting the denial, which would then lead to a path of depression. James built up courage and chose to apply the new learned lesson of confronting one's anxiety and went through with the assignment. To conclude anxiety is the foundation of depression. When one is feeling the devastating feeling of anxiety regarding an activity, one must complete it. Because, if one retrieves due to that intense feeling of anxiety. One will fall into a state of disappointment, which will ultimately lead to depression. Which is illustrated by James Lincoln Collier in a passage titled "Anxiety: Challenge by another name". ...read more.