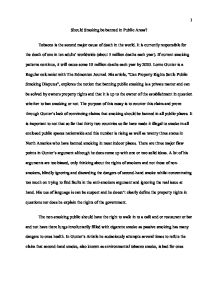 Should Smoking be banned in Public Areas? Tobacco is the second major cause of death in the world.

Should Smoking be banned in Public Areas? Tobacco is the second major cause of death in the world. It is currently responsible for the death of one in ten adults' worldwide (about 5 million deaths each year). If current smoking patterns continue, it will cause some 10 million deaths each year by 2020. Lorne Gunter is a Regular columnist with The Edmonton Journal. His article, "Can Property Rights Settle Public Smoking Disputes", explores the notion that banning public smoking is a private matter and can be solved by owners property rights and that it is up to the owner of the establishment in question whether to ban smoking or not. The purpose of this essay is to counter this claim and prove through Gunter's lack of convincing claims that smoking should be banned in all public places. It is important to not that so far that thirty two countries so far have made it illegal to smoke in all enclosed public spaces nationwide and this number is rising as well as twenty three states in North America who have banned smoking in most indoor places. There are three major flaw points in Gunter's argument although he does come up with one or two solid ideas. ...read more.

That's a fact and the only way to fully protect nonsmokers from secondhand smoke exposure is to completely eliminate smoking in indoor spaces. Having said that The NCI also shows "The U.S. Environmental Protection Agency (EPA), the U.S. National Toxicology Program (NTP), the U.S. Surgeon General, and the International Agency for Research on Cancer (IARC) have classified secondhand smoke as a known human carcinogen (cancer-causing agent)". These are all reputable agencies in the health industry so what they are saying should not be taken lightly and it makes Gunter's health argument slightly unbelievable. As well as lung cancer, second-hand smoke can cause; breast cancer, nasal sinus cavity cancer, and nasopharyngeal cancer in adults, and leukemia, lymphoma, and brain tumors. Yes smokers may have a right to free will but does that mean it's worth the risk in harming all non-smokers making them susceptible to all these different diseases? The answer is simply no. That said, on the subject of smokers, and property owner's free will, Gunter says that it is the owner's prerogative of who he wants to let in. "If you want to cater to a bunch of wheezing, stinky clothed, lung-horking addicts, go ahead. That is your right. ...read more.

for good reason that smoking is a danger indoors and could be a cause to environmental pollution and make it illegal, property rights are meaningless to the debate. Lastly due to some of the language Gunter uses in his article he comes across as too biased and it doesn't help to explain his claim. For example his constant use of the word 'anti-smokers' as a description for people for the ban on smoking. This is a rather harsh word and he makes it seem that any one who doesn't smoke is against the idea of anyone smoking and that they are trying to take away the freedom of smokers. This simply isn't true as there is no such thing as an anti-smoker but at the most extreme, people who are against breathing in second hand smoke for the benefit of everyone's health. Another example of this is when he says "What goes on within your establishment should remain your concern, and yours alone, and not the ken of posturing politicians, poke-nose bureaucrats, cluck-clucking activists or hypersensitive human rights commissioners" (Gunter 1). He is being too offensive here with the language uses and is aggressively blaming measures taken which he feels are unnecessary and it doesn't do much to promote his argument. In conclusion smoking kills. ?? ?? ?? ?? 1 ...read more.