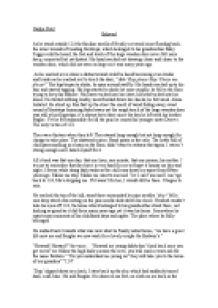 ﻿Nadira Patel Beloved As he stood outside 124 the familiar smells of freshly cut wood came flooding back, the sweet sounds of treading footsteps; which belonged to his grandmother Baby Suggs could be heard, the feel and touch of the large wooden door never felt more deep, connected but yet distant. His hand reached out drawing closer and closer to the wooden door, which did not seem as large as it was many years ago. As he reached even closer a distant sound could be heard becoming even louder and louder as he reached out to touch the door, ?Ahh! Stop please Stop! Please ma please!? His legs began to shake, he spun around swiftly. His hands reached up to his hair and started tugging. His legs started to shake lot more rapidly; he fell to the floor trying to keep his balance. His knees tucked into his chest, his head tucked into his knees. He started sobbing loudly, tears flooded down his cheeks, he felt weak. Alone. Isolated. He stood up. Ran fast up the street the smell of wood fading away, sweet sound of footsteps humming faded away yet the rough touch of the large wooden door was still at his fingertips; it?s always been there since the day he left with his brother Buglar. Yet he felt responsible for all the pain he caused his younger sister Denver. The only victim of 124. They were thirteen when they left. They stayed long enough but not long enough for change to take place. The shattered mirror. Hand prints in the cake. The kettle full of chickpeas smoking in a heap on the floor, didn?t want to witness that again. I weren?t strong enough and I hated myself for it. All it took was that one day, that one hour, one minute, that one person; his mother. I try not to remember that day but it is very hard for me to forget it haunts me day and night; I freeze while doing daily tasks as the chill runs down my spine from fifteen years ago. ...read more.

Makes me stop. Makes me want to succeed. Yet I can?t succeed I can?t go back to 124, Ma?s stopping me. If it wasn?t for her, I would still be there. It began to rain. He reached the top of the hill, stood there surrounded by pine needles ?drip!? fell a rain drop which was resting on the pine needle slide down his check. Howard couldn?t take his eyes off 124, the home which belonged to his grandmother stood there; not looking as grand as it did them many years ago yet it was his home. Somewhere he spent many moments of his childhood days and nights. The place where he fully belonged. He walked back towards what was now what he finally called home, ?we have a great life now me and Burglar we now work for a lovely couple the Bodwin?s.? ?Howard! Howard!? the voice? ?Howard me young diddy don?t look back once you get out of ?ere follow the high barley across the river, you will reach a town ask for the name Bodwin.? ?Do you understand me young un? they will take you to the home of our grandma? ?124? ?Drip? slipped down my check, I stare back up the sky, which had suddenly turned dark, cold, blue. Me and Burglar. No shoes on me feet, no cloth on me back in the dead of winter. ?Don?t look back? the words ran through my head, the words of Paul D. ?me young diddy move upwards unto the north do not look back down upon the south? that dark in the black of night we left on foot, walked all night dared to look back? the words of Paul D ran through me mind. The sun shone on the door of 124, there stood our grandma. ?Mama? came the happy screams of my happy brother Buglar, as me Ma stepped forward with me baby sister Beloved. ...read more.

I can still remember the way Buglar?s face lit up when he saw mama, but he was never the same with Ma after? me poor young sister Beloved if only I helped, I was suppose to take care of them without Pa? sweet home was always welcoming we?d have huge gathering with friends, neighbours they would all come for Granma?s food but it was never the same no more laughter, no more tears of joy, just tears of pain all down to that one day, that one hour, one minute, that one person; Ma. Buglar could be seen chopping wood as Howard walked down to the lane, ?where have you been me young diddy? Burglar asked ? just up the hill? Howard stuttered Burglar didn?t need to ask where, he knew from the distant look in his brother eye?s he knew where he had gone ?to the house.? We were never this distant, I was always close to me young sister Denver all it took was that one day. I turned to look for Beloved that hot day when grandma would talk to people at the gate and Ma busy with Denver, laugher, and joy could be heard; smiles and joyful face could be seen, we played there surrounded by love until the four horsemen came; the school teacher, the nephew, one slave catcher and a sheriff, the house on Bluestone Road turned quite the joyful faces turned to stone, and silence. I shoved into the shed where I could see burglar bleeding in the sawdust surrounded by dirt, Beloved seemed a rag doll her head bopping along to me Mama?s heavy gallop. Slammed me sister went. No sudden movement she lied there still at the end of the shed. Ma stood there panting in, out. The wooden door locked tightly. The room turned dark. The cold weighted my head and everything went blank. That one day, that one hour, that one person. I am unable to go back. Unable to move on. Word count:997 ...read more.