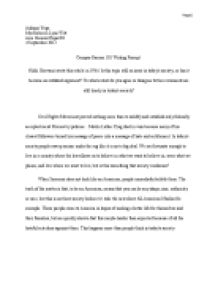 Campus r****m 101 Writing Prompt: Nikki Giovsani wrote this article in 1944. Is this topic still an issue in today's society, or has it become an outdated argument?

﻿Vega Adriana Vega Mrs.Rebecca Lynn Witt Aice General Paper/03 4 September 2012 Campus r****m 101 Writing Prompt: Nikki Giovsani wrote this article in 1944. Is this topic still an issue in today's society, or has it become an outdated argument? To what extent do you agree or disagree tht her comments are still timely in today's society? Civil Rights Movement proved nothing more than to solidfy and establish only federally accepted r****t Proxies by policies... Martin Luther King died in vain because many of his closest followers turned his message of peace into a message of hate and entitlement. In today's society people sweep r****m under the rug like it is not a big deal. We are fortunate enough to live in a country where the law allows us to believe in what we want to believe in, wear what we please, and live where we want to live, but is this something that society condemns? When Someone does not look like an American; people immediatly belittle them. ...read more.

Whoever is to blame, this is something that has been an issue for years past and continues to haunt us. I think that it is fair to say that, until we stand up and make it obvious that we will not stand for racial acts, racial slurs, or anything of the kind, we are all to blame in one way or the other for r****m still existing in America today. Let's stand up and do something about this! I recently watched the Movie "The Help" in theaters and was amazed at how moved I was by it. For those of you that have not had the chance to see it, the movie is set in Mississippi in the decade of the 1960s. It does a great job of shwing how it was to be a black women in those times and how many hardshipsone had togo through. It angeres me to see black women be treated as though they were animals. It was as if people did not think that they deserved to have the same rights and luxuries as other races in this era were fortuante enough to have. ...read more.

" As most of you may know a young African American teenage boy named Trayvon Martin was gun down bt a caucasian man nmed Zimmerman because he was walking in a suburban neighborhood, and suppisedly he was acting of supicious matter. Now his family is fighting for justice for their son, but now the talk in African American homes is avoid confrontations with authority figures and try and remain cooperative when you know for a fact that yur rights are being violated. It's amazing how certain races have to act a certain way when there with authority, when authority is supposed to keep us safe. After reading articles and researching materials regarding this topic, I've come to a conclusion that r****m still exist here in America, but its not so expressed as before in the past. But we as the people need to come together and end this, its been done in the past and i can be done now. Certain colored people should not have to act a certain way when being stopped by authority. So we the people need to end this we're all the same race, the human race. ...read more.