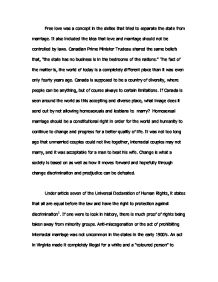 Pro Gay Marriage Essay. If Canada is seen around the world as this accepting and diverse place, what image does it send out by not allowing homosexuals and lesbians to marry? h********l marriage should be a constitutional right in order for the world an

Free love was a concept in the sixties that tried to separate the state from marriage. It also included the idea that love and marriage should not be controlled by laws. Canadian Prime Minister Trudeau shared the same beliefs that, "the state has no business is in the bedrooms of the nations." The fact of the matter is, the world of today is a completely different place than it was even only fourty years ago. Canada is supposed to be a country of diversity, where people can be anything, but of course always to certain limitations. If Canada is seen around the world as this accepting and diverse place, what image does it send out by not allowing homosexuals and lesbians to marry? h********l marriage should be a constitutional right in order for the world and humanity to continue to change and progress for a better quality of life. It was not too long ago that unmarried couples could not live together, interracial couples may not marry, and it was acceptable for a man to beat his wife. ...read more.

With the discrimination that comes from disregarding homosexuals and the pleads to have the right to marriage also comes outward hatred from other groups of people. In 2004 a General Social Survey in Canada found that approximately 362,000 people over the age of 18 identify themselves as gay or lesbian3. Of 60,000 hate crimes commited in Canada in 1994, s****l orientation was the third largest reason just behind race and religion4. The Canadian Charter of Rights and Freedoms also states under article 15 that every individual is equal before and under the law and has the right to the equal protection and equal benefit of the law without discrimination based on race, national or ethnic origin, colour, religion, s*x, age or mental or physical disability5. s****l orientation is not included in these groups. Excluding s****l orientation from protection against discrimination leaves a minority group unprotected and open to hate crimes. Perhaps if society began to accept homosexuals as it did with interracial couples, younger generations would grow up with a positive attitude towards them rather than shunning them. ...read more.